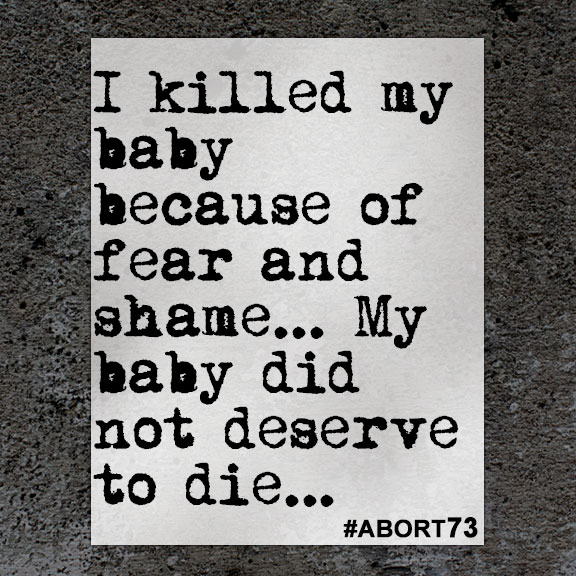 I killed my baby because of fear and shame… My baby did not deserve to die...

I had been flirting with my workmate for a little over a year. Then in February, we had unplanned sex a few times. In about three weeks, I discovered I was pregnant. I did not expect it since my period is irregular, and I had been with my ex-boyfriend for a long time and never once got gotten pregnant. Well, I started to really like my workmate, or so I thought. He was Moslem and I am a Christian, so by all means this was a dead end. I told him about the pregnancy and all of a sudden he found it the perfect time to tell me about his girlfriend, who he loves so much. He told me I should not tell anyone about my pregnancy or that it's his. He accused me of planning to get pregnant and said that I wanted it. He did not suggest abortion, but he neglected me at the time I needed him most. I had unanswered questions and fears that I needed to talk to him about, but he saw this as the right time to totally block me out—not answering my calls or even checking on me. Long story short, I took two weeks to debate whether I should have the baby or abort. At times I would choose life then the very next day/hour choose abortion. It was a very stressful time.

I did not talk to my mum until after the abortion but instead talked to my step-sister, who encouraged me to have the abortion. She had already had two. I went over to her city and had the abortion done. It was the pill. The moment I walked out of the clinic I regretted my decision, but I had to complete the procedure by taking the other pills the following day. I have cried since that day. I can't concentrate on anything. I think of my baby every single hour of every day. I have prayed and asked God to forgive me but I can't seem to forgive myself. I am 32 and employed; this would have been my first baby. I killed my baby because of fear and shame and since I did it, none of those things matter anymore. My baby did not deserve to die. I haven't talked to my sister since a week after I left her place. I feel if it wasn't for her encouragement, I would still be pregnant. I told my mom about it and she said she would have supported me 100%. This breaks my heart more. I don't know if I will ever get another baby again as I am aging and am not in a relationship currently. I don't even feel that I deserve another after what I did to the first.

If you are debating what to do about your pregnancy, I beg you to choose life. I tried to cover up a sin by committing another even-greater sin. I dream of babies every night. It's so tormenting; no one should go through it. The baby daddy, despite being unsupportive, blames me for having killed the baby, his first born. I am the worst person. Please choose life.

I tried to have another baby with the same person. I think I thought replacing my baby would heal me. Well, I didn’t conceive, and it broke my heart even more. I know the guy’s behaviour won’t change, so I have decided to leave things alone and suffer with the consequences of my decision. I wish I could turn back time.