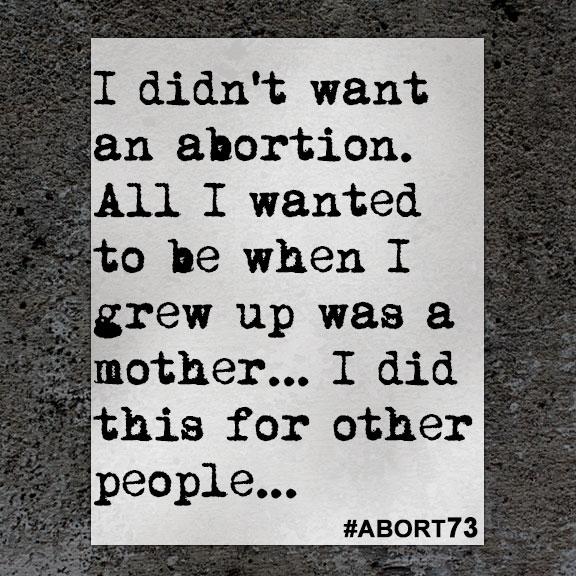 I didn’t want an abortion. All I wanted to be when I grew up was a mother... I did this for other people...

But I didn’t want an abortion. All I wanted to be when I grew up was a mother. All I wanted was to have a family. I did this for other people. If you have a sister or a friend or a daughter who is pregnant, ask THEM what THEY want. I broke up with my boyfriend after it happened, and I have cut my mother and father out of my life for my mental well-being. This was never my choice. If you force someone to do this because you believe this is best for that person, you will hurt them in unbelievable ways. I would have laid down my life for my child; I would have done whatever it would have taken. I had the abortion not because I didn’t think I could do raise a child—I can do whatever I set my mind to; I had the abortion, for my ex-boyfriend and my mother. So if your loved one becomes pregnant, get rid of your opinions, your judgements, and ask them in open air, not behind closed doors where your voice is hidden. Ask them, “What do you want? And how can I help you?” The abortion was not my choice, and the aftermath has affected many people. Please listen to what the woman wants.

I had an abortion.