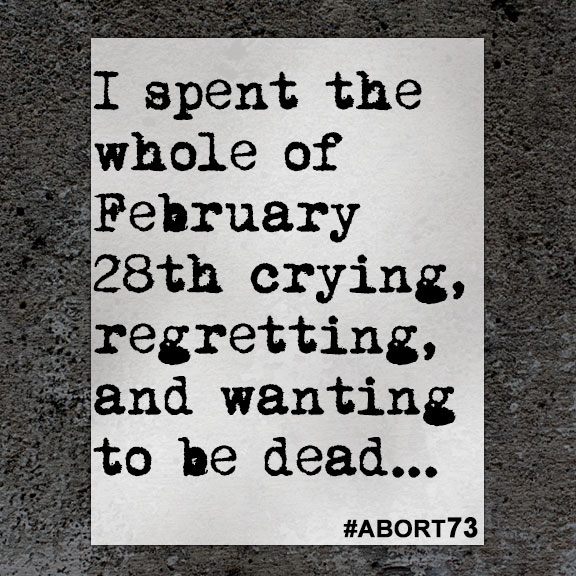 I spent the whole of February 28th crying, regretting, and wanting to be dead...

February 28th, 2017. That's the day my baby was to be born, or so I was told. Back in July of last year, I found out I was pregnant. I won't deny that I was terrified or that I had made the mistake of my life. I still remember the sound of my baby's heartbeat; it made me want to get the baby out of that ultrasound screen so bad. I honestly had never felt such love. I told my then-boyfriend about our situation, and the first thing he said was, ''You can't have that kid.’’ I cried and cried and told no one but my oldest sister. She said I could do it without him, that I would survive and so would the baby. She mentioned how the baby would never need any love since he would get all the family love he could ever need. I should have listened to her. Two weeks after knowing I was pregnant, two weeks after singing, reading and talking to my baby before bed, I committed the worst mistake in my life. I was about to move to Mexico, and I didn't want a child to stop me from such a big step in life, nor did I want to face my boyfriend and his family. So I took my baby's life away. Girls, it does not matter who says what; what should matter to you is that you carry life inside you. I understand that sometimes the fear gets the best of us, but believe me, I spent the whole of February 28th crying, regretting, and wanting to be dead. I can’t hold kids without thinking about what mine would have looked like. Would he have had my smile? Maybe his father's eyes? Or maybe would the baby have been a she? My best friend is four months pregnant, and she listened to me. In December she will be a mother, and I will be there when it happens. Yesterday we went baby clothes shopping, and I swear it hurt to see all the things I would have wanted my baby to wear. Now I am here wondering why I was so stupid to decide not to have a kid in kindergarten in the next three years, or an adolescence talk in the next 11 years. I'm here wondering who she could have been or what he could have done when he had grown up. I know it is difficult to have a child, but it's so much more difficult to have a close friend that's pregnant and for her to ask you if you believe this or that will look good on her baby. If I could go back in time, I would listen to my heart.