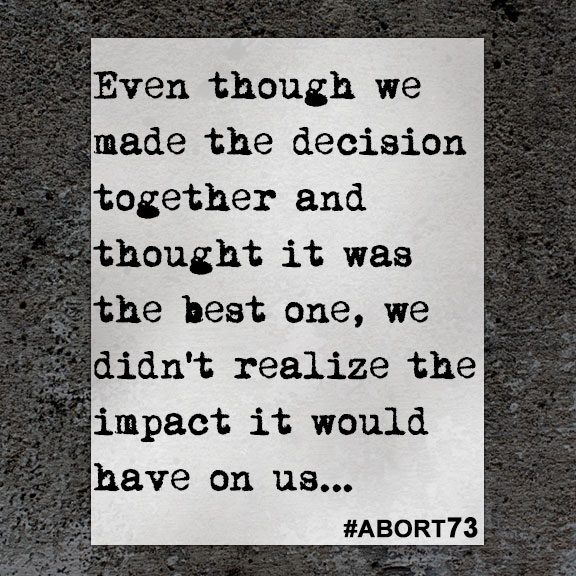 Even though we made the decision together and thought it was the best one, we didn't realize the impact it would have on us...

I have had two abortions. My first was about 11 years ago. I had started dating an old friend after a break up with my then 2-year old's father; it was a rebound relationship. We weren't together long when I became pregnant. He was a sweet guy, but after I found out I was pregnant, I decided that he wasn't who I wanted to be with. I had already had two children by two different men, and the youngest one's father and I were having serious issues. We were fighting and he was causing a lot of problems for me. I talked to my best friend at the time and decided I was going to terminate the pregnancy. So I did so and never batted an eye. I also never told the father the truth. I told him I miscarried, and we broke up shortly after. I felt relieved. Occasionally I thought about it, but I never really cried over it. A couple of months ago I found out I was pregnant again, with my now boyfriend, and I panicked. We have had a rocky 4 1/2 year relationship. We have just recently reunited and are still trying to work our problems out, which we shouldn't be. After all he's put me through, I shouldn't still be with him, but I truly love him and when things are good, they are good. I had very mixed emotions about this pregnancy. At times I would kinda be excited about it, but at others I would freak out. He never really showed any interest in the baby, and every time I would try to talk to him about things, he would just freak out and shut down. After weeks of going back and forth with my feelings and his feelings, I decided it would be best to terminate the pregnancy. He agreed as well. I scheduled the appointment, and the day arrived when it was time to go. We both cried the whole way there and the whole time we were in the waiting room. We were the only ones that were emotional. Everyone else seemed so calm and happy. I didn't think that this was normal. After my counseling, we went outside and I asked him one last time if he was sure we should do it. I guess secretly I wanted him to talk me out of it, but as he cried and said it's probably for the best, I told him OK and went back in to start the process. I cried the whole time. Since then we have both regretted our decision and have had a horrible time coping with it. Even though we made the decision together and thought it was the best one, we didn't realize the impact it would have on us emotionally. So I guess what I’m saying is that my advice to anyone in this situation is, if you have any doubts, please don't do it!