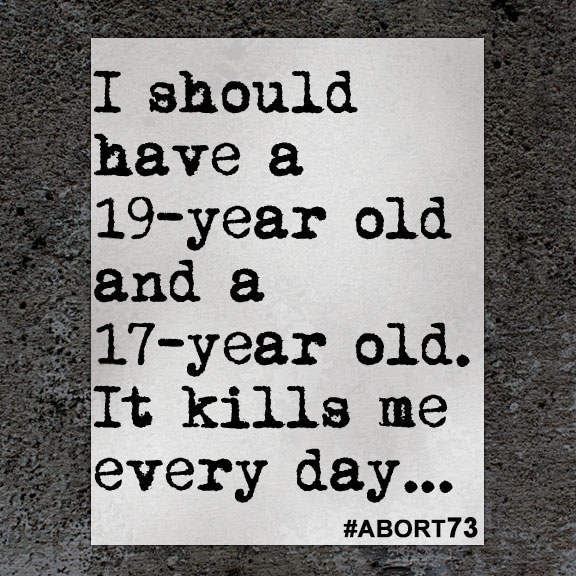 I was 16 the first time I got pregnant. The guy was engaged to me previous to that, but when he and his mom found out there was only one option—abortion. I didn't think it through; I didn't process the emotions at all. I ended up hating that guy. Two years later I was working two jobs and was pregnant less than a month when I found out. I had a boyfriend I really loved, but I was young and stupid, and we had issues. I cheated on him the weekend I had conceived. I wasn't sure if it was his or my ex, who had cheated on his pregnant girlfriend with me. My boyfriend stood by me but was unsure if he could raise someone else’s child. To stay with him, I thought abortion was the only option. I was broke and spent $250 on a bad abortion. I signed in, went back to the room, and they injected me with supposedly pain medicine. It was nothing. I told the doctors I didn't want to go through with it. They said I deserved what I got for putting myself in that situation. I felt like my insides were being ripped out of me. When it was over, they left me on a table covered in blood with a fan. I should have a 19-year old and a 17-year old. It kills me every day. I have had an emotional breakdown since then and can’t have kids now. I still have not moved on from that experience I have such a huge hole inside my heart. I still can’t ever forget that. Please learn; you will regret it.