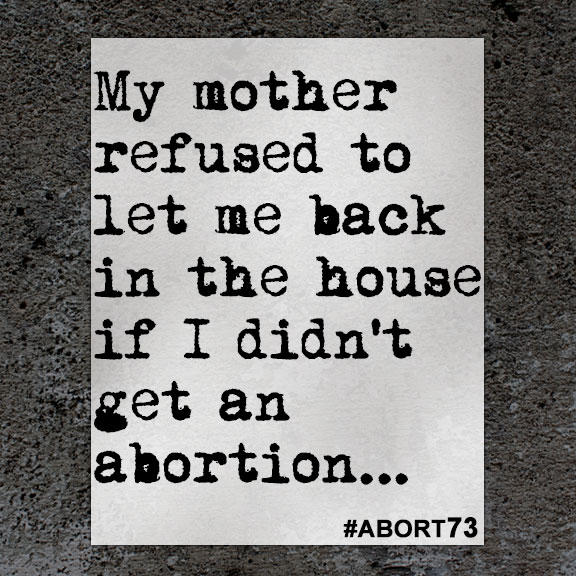 My mother refused to let me back in the house if I didn't get an abortion...

First, if you're reading this, don't have an abortion. It was my biggest mistake and the hardest thing I have ever and will ever do. I found out I was pregnant at about 8 weeks. I didn't have any symptoms, so I never knew. The father was a guy I’d seen casually and have known for 4-5 years. I thought so highly of him until now. My friends were my biggest support system. I desperately wanted to keep it, but I come from a very strict and religious family. My parents were not supportive, and my mother refused to let me back in the house if I didn't get an abortion. I was hurting so much because I had nowhere else to go. That's where I lived; that was my home, my family.  She supported my younger sister who had a baby at the age of 20, but she wouldn't support me because she didn't want to deal with any more shame. I've never felt so hurt before. I've always come second. So with the world turned against me, I decided to have the abortion—at 14 weeks, which made it even harder. It's so hard to hide the pain from everyone; it gets exhausting. I'm pretending to be someone else. It's so hard to look at a baby and try to act like nothing happened. I take multiple showers a day because it's easier to cry in there with the water dripping down your face. I can scream in pain so no one else can hear me. I cry every time I’m in the car because no one is around me to watch me and see me...