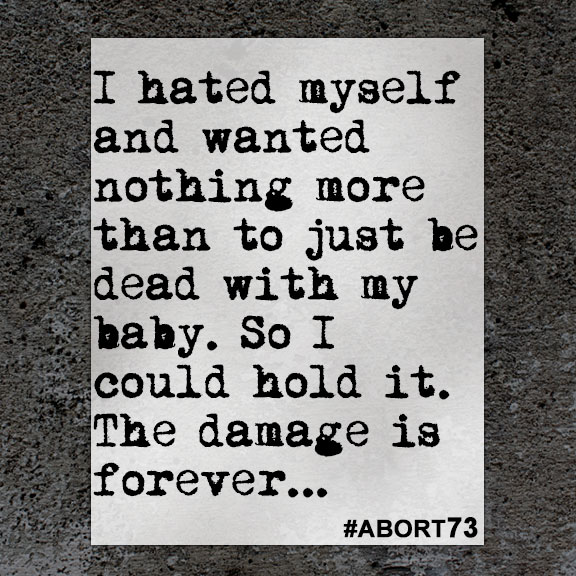 I hated myself and wanted nothing more than to just be dead with my baby. So I could hold it. The damage is forever...

At the age of 20 I moved out of state to be with my boyfriend. I had plans of joining the military and hadn't planned on a baby. Honestly I didn't think I could have children, after three years in a previous relationship without pregnancies. I ended up pregnant within a month of being here. He was so excited; I was so scared. His family made me feel like I had no choice, that I had to have the baby. My dreams died, and I felt trapped. I made my appointment in secret and ran away from him and his family to come back home. I remember the day. I cried so much before, during, and after. I even asked to see it when they were done. I carried the ultrasound with me for days and cried as I held it in my hands. I refused to take the meds they gave me because I felt I deserved to feel every ounce of pain. I told the daddy I miscarried because I didn't want to hurt him. But it did anyways. He knew in his heart what I did. Our relationship will never be the same. I eventually told him and his family the truth. I went back afterwards and cried when I would look at him. I cried when He would touch me. I hated myself and wanted nothing more than to just be dead with my baby. So I could hold it. The damage is forever. A year and a half later, we got pregnant again. But I actually miscarried, and I blamed myself even more. I felt that God was punishing me for killing my first child. My boyfriend showed no emotion, and told me it was because I killed his first child. So losing one felt like losing two. I feel my guilt every day and fight the urge to die because now I have a living child. But it will never fill the hole in my heart. I would do anything to just take it all back.