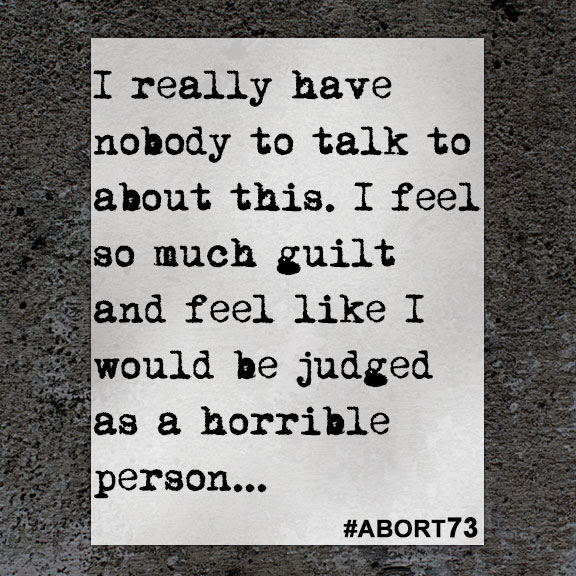 I really have nobody to talk to about this. I feel so much guilt and feel like I would be judged as a horrible person...

Growing up, I was raised by my mom who wasn't very religious. My dad, who was separated from my mom, was religious. When I was nine, my mom was incarcerated. After that, I was raised by my dad. He was pretty tough, strict and very overprotective of me. At the age of 18 I moved in with my aunt from my mom's side. At this time I had a boyfriend, who is now my soon-to-be husband. I got pregnant. Before I even took a pregnancy test, I had I had already decided to get at abortion if the test came up positive. I took the test Saturday and made the appointment by Monday. The whole experience was so unreal. There were so many girls in the waiting room. Looking back, I can hardly believe we were all there for the same thing. At the time my boyfriend went with whatever decision I wanted. Six years later, I still feel guilty over the decision I made—especially when I think about how selfish I was being, knowing the statistics of how couples end up after having a baby. After the abortion, I just wanted to get my life together. I wanted to hurry and have a baby to replace the one I gave up. I am a Catholic and now going through the marriage preparation, I think about the time I had the abortion and how, at the time, I didn’t really think about how bad abortion was and how I just killed a part of me. To this day, nobody knows about the abortion except me, my fiancé, and a close cousin. I try not to think about it, but I can't help thinking that the person I really love made something with me and I just gave it up. At first, I really tried blaming him. I wish he would have done more to stop me, but in the end I know it was all me. I even think about how, when we start having kids, I'm always going to think about the fact that I was pregnant once before. I really have nobody to talk to about this. I feel so much guilt and feel like I would be judged as a horrible person.