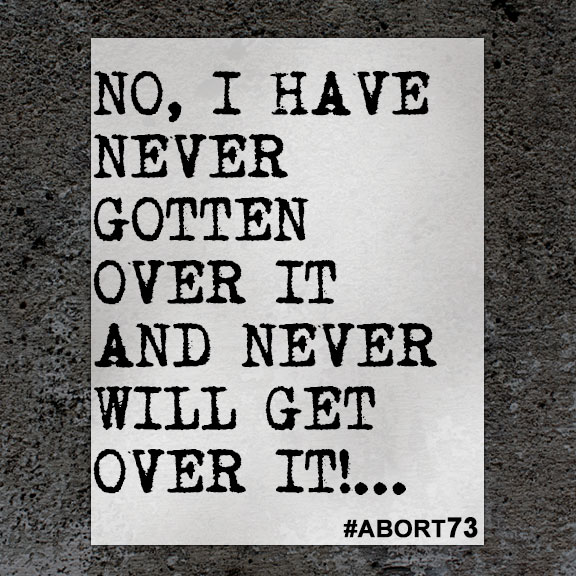 NO, I HAVE NEVER GOTTEN OVER IT AND NEVER WILL GET OVER IT!...

I was 25 and a single mom to a 2-year-old daughter. I had reconnected with my very first boyfriend from my freshman year of high school. Old feelings resurfaced, and I ended up pregnant. I did not realize I had missed my period because I was always so focused on my daughter that it did not come into my mind. I was scheduling visitation for my daughter with her father and noticed I was 6-weeks late, so I took a test and found out I was pregnant for sure. I had gotten an ultrasound and there was my baby. I talked to the father and he was excited, but I realized he had two other babies with two other women. This would be his third baby with a third woman. I got so scared that my baby would be put aside like my daughter is and was by her father because he too has two other sons from two other women and has to pay child support, so money never really comes. My first thought was: How am I going to do this with two babies? How will I be able to give each the attention they need? Is this baby going to be loved by his dad? Is his dad going to be involved? All these things went through my mind, and I felt I had no other option.

No one wanted to help me or at least they did not show it or speak out. I called my best friend and made the decision to ask her to drive me to an abortion clinic because I was just too scared. I went up to the office and I SWEAR with ALL my being that as soon as I took the pill and I saw the little blood, I started to freak out and tell the doctors that I could not do it anymore and that my baby needed to live! They looked at me and said that it was too late and that for my safety and for my daughter to have her mother, they needed to do the procedure because there was no way the baby would survive now. I remember laying on the table. The nurses were so rude and talked so badly about these babies, like the babies meant nothing. The last thing I heard was, “Shut up! This young lady is crying and is not asleep yet and can hear you guys!"

The next thing I know, I am sitting next to this girl and I started crying. I will NEVER forget what those nurses said, but I will also never forget what the girl sitting next to me had to say when she saw me crying, "It is OK; I've had this done before and it will be fine! You will get over it!" My baby has been gone for four years on March 30! NO, I HAVE NEVER GOTTEN OVER IT AND NEVER WILL GET OVER IT! I regret being so weak! I regret letting everything but my LOVE for this baby take me over! I cry every single time we get closer and closer to that date. Even though I never knew if my baby was a boy or girl, I still named the baby (even if people do not think I have the right!). The boy name is Stephen Andrew; the girl name is Makayla Stella. For anyone out there that thinks you will not regret the decision, I want you all to know. I told myself I would not regret it and now after almost four years, I still do!