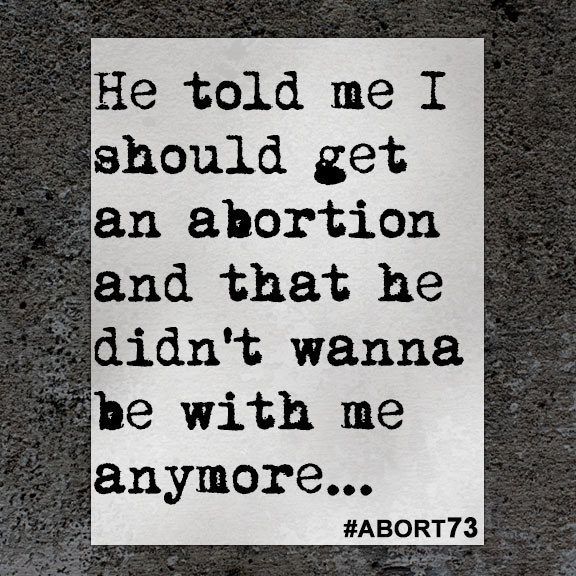 He told me I should get an abortion and that he didn't wanna be with me anymore...

I wanted to write my story to tell others that if you have any, ANY doubts about having an abortion, DO NOT GET ONE. I had every single card played against me, so I justified it, but a small part of me thought "Maybe I could make this work." Tthat very small amount of doubt turned into 100% regret.

I had been in a very rocky relationship for about 2 1/2 years. We were crazy about each other but had insane fights. He was verbally abusive, but I loved him and I took him back every time. When we were good, we were really good. After breaking up 3 or 4 times we hooked up. I told him there was a chance I could get pregnant. He said, "Whatever it takes to be with you." When I found out I was pregnant, he wanted me to come over so he could rub my belly. He told me he wanted me to pick out the name. After two weeks of making future baby room knickknacks and picking out names, he told me that he thinks we made a huge mistake. He told me I should get an abortion and that he didn't wanna be with me anymore. He was already a single dad, having just worked himself through school. He had just started a new job and refused to even ask off for work to take me. Because of the timing, it was too late to take the pill. I had to have a surgical abortion. I’d already had a non-surgical abortion about two months after meeting him. I didn’t Never think twice about it because I barely knew him at the time. After almost three years together, the second abortion was a completely different story.

The stress of everything, and being pregnant and tired all the time, caused me to be late to my job so much that I got fired. I dropped my college class. I was pregnant, unemployed, and now single. I knew deep down I wanted to keep it, but I convinced myself it would be impossible. My sister had had an abortion too and told me not to tell our mom, because she would just give me crap about being irresponsible and stress me out even more. I didn't tell my mom until after it had been done, when she told me she would've helped me raise the baby and wished I hadn't done it. She confessed that she had had an abortion herself, but didn't want to tell me why. I knew a lot of single mothers from my serving job and saw how hard it was for them. They all had help from their mothers, but my mother was still working full-time, unlike theirs.

The procedure itself was the most painful thing I have ever felt. I cried for weeks on end. My ex paid for it, but I went through extreme depression for months. I thought moving in with a friend and taking more classes with a new career goal would help, but the depression still continued. It's now been almost two years. I have come out of the severe depression, but I still have terrible nights thinking about it sometimes. I ended up turning to my ex for comfort and now we are still hanging out, having safe-sex, but with no intentions of getting back together. I tried to sign up for dating sites and never went on a single date. I feel like I have been wasting two years of my youth just grieving over the whole process. I know I should've gotten therapy a long time ago, but every semester I would just get busy—and with school and work, I couldn't afford it, nor had the time. I probably could've gotten through school faster had I not spent so much time depressed. I'm constantly thinking I will never find anybody in time to have another kid. I was raised by my stepfather; my dad moved a state away when I was two, making me terrified I was gonna raise a kid whose dad didn't want them—and I would have to explain that to the kid one day, like my mom had to explain to me why my dad moved away from me. Just another reason why I thought I was making the right decision. I wanted my child to have a dad who would do all those pregnancy photos with me, who would post on Facebook how excited they were, who was gonna step up to the plate even though our relationship wasn't perfect. And I was heartbroken I wasn't gonna have that, that I would be doing the whole thing single. I wish more than anything I would've been a single mother.

Every day is different, and it's gotten much better, but I still have really bad days. I don't know if I will ever truly get over what I did. Like I said, if you have EVEN THE SMALLEST AMOUNT OF DOUBT: don't do it.