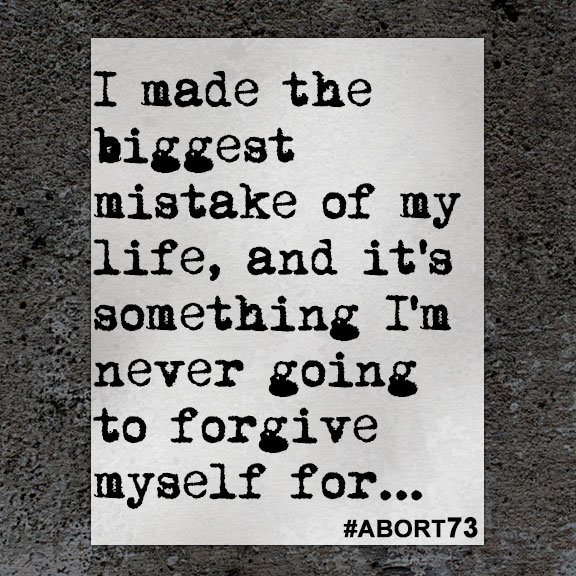 I made the biggest mistake of my life, and it's something I'm never going to forgive myself for...

I got an abortion four days ago, on March 4, 2017. I knew I didn't want one, I knew it was wrong, and I knew it was a mistake. I'm 21 and a senior in college. I'm graduating in May and so is my boyfriend. He's the logical one, and I'm the emotional one. I wanted to keep my baby, but he refused to even consider it. Although I know he would help me raise the baby in the end, he would resent me and even told me how miserable he would be. I kept saying, "I don't want to have an abortion; I want to keep my baby; this is wrong; I’m going to regret this; you're forcing me to do this," etc, etc. He still kept saying we had to. He got up and drove me to the clinic; thankfully there were no protestors. I went in still saying I didn't want to do it.

Right before I went back, my boyfriend finally told me, "If you get back there and decide you can't, I'm not forcing you to do this.” But his face was saying, "You have to get this abortion." Minutes later, they called me back and what was I supposed to do—ruin my boyfriend's life? He made it very clear that’s what I’d be doing if I kept the baby. I was only sex weeks along, so it was a quick and easy procedure. When I woke up, I felt alright. It wasn't until we left the city that my crying started. I haven't stopped crying, my cramps are unbearable, and there's so much blood. I made the biggest mistake of my life, and it's something I'm never going to forgive myself for.

I can't stop crying. I hate myself. I have a stuffed animal I keep dressing up in the onesie I was given at a Women's Care Center when I got my pregnancy test. They were so kind there. I now realize abortion is murder, and now I have to live with the fact that I murdered my first child for the rest of my life. I don't want anyone else to ever have to feel this way. If it was illegal I would still have my baby. I wish I had at least postponed the appointment a few weeks, so I would have been able to have more time. Now it's too late, and there's nothing I can do to ever get my baby back. I'm never going to hold him, hug him, kiss him, care for him, feed him, take him to his first day of school, take him to college, watch him grow up, read him stories, or play with him. And those are only a few things I'm never going to get to do because of abortion.