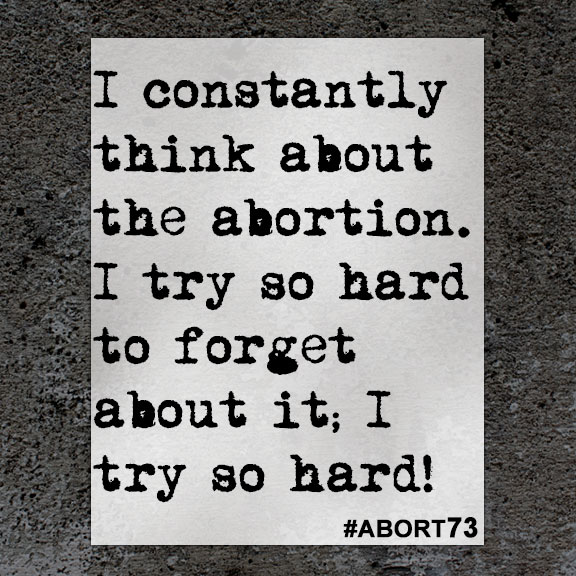 I'm a high school student, and I am about to graduate in June 2017. When I found out I was pregnant, I was shocked. I didn't know how to react or what to think. I was already 9-weeks pregnant, clueless. All I could tell myself was that I wasn't ready; I can't raise a child, I'm "too young;" I have my whole life ahead of me! I told my boyfriend that I was pregnant, and he told me he was willing to support whatever decision I was going to make. I didn't know what to do. At first he wanted to keep it, but I insisted that we weren't financially stable. He agreed. So a few days later, I called Planned Parenthood and got set up for it a week later. Once the day finally came, I got up early in the morning. My boyfriend and I got ready to head downtown.

I waited for my name to be called in the waiting room with my boyfriend. The nurse guided me to an empty back room. The room had a machine; it looked to be like a vacuum. Then there was a machine where you can see an ultrasound. As I waited for the nurses and doctors, a nurse walked in. She introduced herself and was very nice. Everybody treated me with respect, I wasn’t used to it. When the nurse checked the ultrasound, she asked me if I wanted to see it and if I wanted a picture. I thought that If I didn’t see it one last time, I could just say “goodbye” and forget about it for the rest of my life. Once the doctor walked in with everything prepared, she told me that she would take good care of me. I trusted her word, so I went along with the procedure. As I was drugged, I was getting rid of this life that my boyfriend and I had created. It was sucked out through the tube, and all I could think during that time was that "it's good.” I'm doing it for a good reason; nothing will happen; things will just go back to the way they used to be; I don't have to worry about anything anymore.

Once everything was done, I didn't thank the doctor who'd done the procedure. I felt like I didn't need to thank her. I asked the nurse, “Where will the baby go?" She replied, “You mean the waste?" And that moment right there, that very last moment, my heart dropped completely! Moments later, I walked into the recovery room where I was given soda, crackers, a lollipop, and a pad. Then, I met my boyfriend outside. He told me that he loves me and that he is always going to be there for me. As we walked out, I felt relieved at the moment, but the next day, that's when my depression started. I constantly think about the abortion. I try so hard to forget about it; I try so hard! I cry every night knowing that I killed this life that was growing inside of me for two months! I remember seeing its little hand, leg, and head. It has only been a couple days since my procedure was done. I feel so guilty, devastated, sad, and angry about what I have done. I wish and pray that I could reverse time and keep the baby. I think to myself every day that I could have had a little me running around screaming, “Mommy, I'm hungry" or “Mommy, I love you." I don't know what to do now; everything is done. I made my choice, and I don't know what to do now. I spoke to my boyfriend about having a baby for real this time, but the thing is I don't know how long it will take me to have another baby because the same day of the abortion, I had in implant inserted into my upper left arm.

I believe that if I do have another baby right now, or sometime this year, I will keep my baby and hopefully forget about the first.