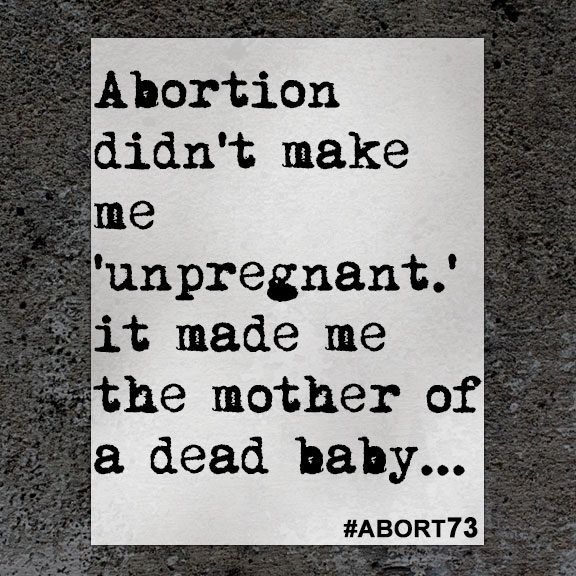 Abortion didn't make me 'unpregnant.' it made me the mother of a dead baby...

The first thing I want to say is, if you're here to get advice on abortion. DO NOT DO IT.

I'm sharing my story because I'm struggling. I feel like being able to tell someone how I'm feeling will help. I've always been strongly opposed to abortion. I've always said I'd never have one. I fell out with my best friend in February of last year over her abortion, and I haven't spoken to her since. In October, when I found out I was pregnant, it was a massive shock. I'd been on the pill for a few years, been with my boyfriend for a year and a half, and we were so happy. I knew straight away I couldn't go through with an abortion. My boyfriend on the other hand didn't care. All he wanted was for me to have the abortion, and he'd have done anything to get me to have one. He was supportive, don't get me wrong. He was there every step of the way and continues to support me now, but I feel he should have taken my views into account back then.

I went for my first scan on a Thursday evening. I was told I was about six weeks along. This hurt, a lot—knowing there was a tiny life with a heartbeat inside of me. I had my first of many breakdowns.

I had to go to hospital to have it done as I was on blood thinners. I was having knee surgery three weeks later, and it posed a larger risk. I had a breakdown taking the first tablet. It took me three hours to take it. ''The hardest part is over,'' one of the nurses told me. Having the abortion was easy. The mental issues that come with it are difficult.

I spent bonfire night in hospital. My boyfriend stayed with me all day. The cramping was horrendous. It's NOT just like a heavy period, not at all. The toilet looked like a scene from Carrie. The amount of blood was scary. How does a human lose so much blood and then get sent away to get on with their day like nothing had happened?

I had to go back in twice more to check if it had all passed. It hadn’t. I had to have a suction abortion to remove what was left. By this point I hated my boyfriend. I got angry at him for no reason. I blamed him. I still blame him.

Fast forward to four months later, I'm not sleeping. I'm waking up every night having nightmares. My best friend has just had a baby, and I hate it. I can't see babies in public because I have mini-breakdowns every time.

I know I'm only ever going to get over this when I have my own baby in my arms. Abortion didn't make me 'unpregnant.' it made me the mother of a dead baby.