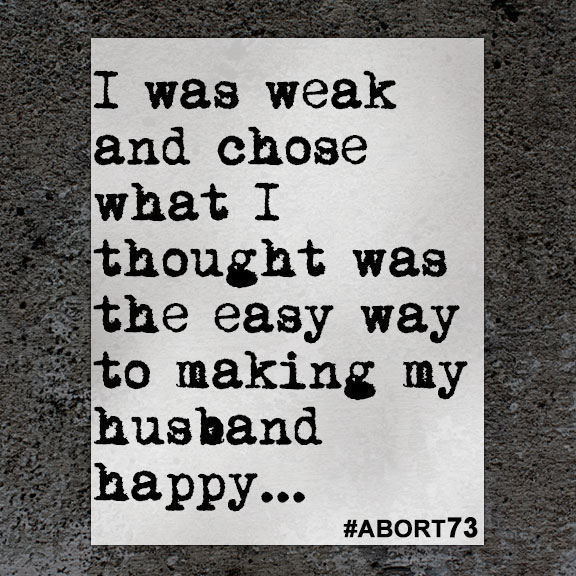 I was weak and chose what I thought was the easy way to making my husband happy...

I stopped my birth control in July of 2014. To my disbelief, I was pregnant in September. My husband and I had talked about having another child, so I was excited and also nervous. I told my husband, and he was angry. I couldn't understand. I thought that we had talked about this, and we wanted another baby. He said that he was never really on board with having another baby and that the timing was not right. I was 100% against abortion, so when he mentioned it I said "absolutely not" and explained my beliefs. He didn't listen, and I'm sure he didn't care. He kept bringing it up, saying it was our only option. I thought about adoption, but how do explain that to your 9-year-old? After a few weeks of feeling like the pregnancy was all my fault and the only way to make my husband happy was to abort the baby, I made the appointment. I had to go to another state to be able to do the procedure in one appointment instead of two. I informed my husband of my appointment time and never once was offered to have him by my side. I went to my appointment alone in December. It was three hours away. I remember the text messages I received from my husband saying it was for the best. I continued to not want to do it, but felt that it was my only option. I opted to have a suction abortion; I wanted it to be over with and not to think about it. The staff were very comforting, but the procedure was painful. I opted not to have any IV meds due to driving myself and not having a ride. It was awful; the cramps consumed me. I left as soon as they would let me and I drove myself the three hours home. I vowed to myself that I would never get pregnant again, even though I wanted more children. I told myself I didn't deserve another baby—to feel the joy and happiness of watching a child grow up. It took its toll on my marriage for many months. I blamed him and hated him for making me do it.  He didn't make me do it. He didn't make me do anything. I was weak and chose what I thought was the easy way to making my husband happy. I didn't take into account my feelings until it was too late. The regret still haunts me to this day. We did get pregnant a year later, in October 2015. I miscarried in December 2015. I feel like god punished me for aborting my baby. I have decided not to have more children. I have a wonderful son who is my world, but not a day goes by that I don't think of having two wonderful children. I feel like such a hypocrite. I don't believe in abortion, yet I had one. I refuse to tell anyone; I keep this deep dark secret. I don't want people looking at me and judging me.