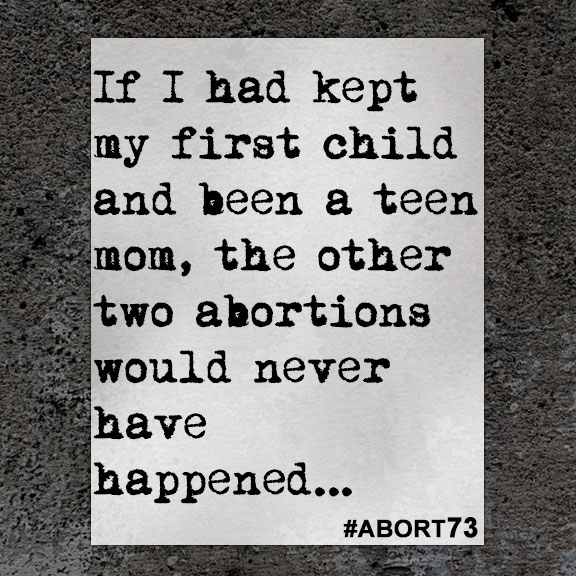 If I had kept my first child and been a teen mom, the other two abortions would never have happened...

This is the hardest thing I have ever had to do—being brutally honest and speaking about my journey with abortion is something I never thought I could do. I don't think any woman in this world is as disgusting and vile as I am because you see I didn't have one abortion, I had THREE!

I was 16 years old. I had always been slow when it came to boys. All my friends had been on dates, kissed boys, had sex and even been in relationships. I was sort of the group's miss-goody-two-shoes, and the butt of everyone's jokes. One weekend my aunt travelled to my hometown with a bunch of friends. When they arrived, she came to drop off her stuff before heading out for the night and insisted that I come with her. It was on that night out that I met my first boyfriend. He was not really my type and I didn't really find him attractive, but he was funny and that sort of kept me interested enough to continue talking to him. The weekend ended, and they left and. A couple weeks later I went to visit my aunt, and he came over and asked to take me out. I declined, but he was persistent and that was kind of attractive to me. We went on dates for three weeks and before I returned to go back home, he asked me to make it official with him as he didn't want to share me with anyone else. I agreed to give "us" a go, and so began the rollercoaster relationship that lasted five years. We went away on holiday and on our way back, I suffered from intense spells of nausea. I tried everything from salt and vinegar crisps and flat Coke to mint sweets but nothing worked. I eventually got a pregnancy test and took it at the side of the road. It was positive, and I remember crying my eyes out. I was 17 years old, from a staunch catholic home with parents who trusted me. How could I keep it? My boyfriend suggested an abortion and I agreed.

Fast forward a couple of years. I am now in my second long-term relationship with the second guy I had been intimate with, and he Is the love of my life. We had been together for two years and had just moved in together because he was insecure and needed me in the same town as him. I had quit my job and because my family wasn't happy about us moving in together before marriage, they cut me off from all financial assistance. So I depended solely on him to survive. I was on the pill and had been so sick I needed to get meds from the clinic, and that is when it happened. I couldn't believe that this had happened again. I was shattered but excited for the life growing inside my belly. My boyfriend was excited at first, but the more we struggled to survive, the more we realised that we could not bring a kid into this kind of life. Adoption did not even cross my mind. I wish it had. My boyfriend made the appointment for the abortion and as I lay there screaming on that cold steel table, I secretly prayed that I could die instead of that innocent life I had taken.

The relationship with guy number two fast became toxic and abusive and before long my parents fetched me and took me home. I felt safer there than I had felt in years, except for the deep dark secret I had that haunted me every single day of my life. I was never going to get into a relationship again and even though my family knew nothing about what I had done, they had been all I needed. I grew close to a distant cousin's husband. He was having issues in his marriage but still took the time to counsel me and really give me good advice. He was my best friend, my judge-free zone, my pick-me-up person, my happy place where I could be me—the cute, funny, intelligent, happy and sexy me that was buried for so many years by two insecure, jealous and abusive men who made me feel like trash. I was not in the least bit attracted to him; we just had an amazing friendship, and he built me up day by day and helped me to find my smile. He would send me goodie bags when I wasn't well and take time to text me about my day while his wife was off with her boss, who she was having an affair with. I remember telling him that I didn't understand how she could do that to a man as amazing as he was. He responded by saying that not every one was as amazing as I was and that he wished I were his. That is when it started. I justified the flirting and inappropriate texts by telling myself that it was ok because we did not touch each other and his wife was having an affair. But it wasn't ok. I knew deep down how wrong it was, and yet he was relentless in his pursuing and compliments and gifts and adoring words until I gave in. This time I was on the injection and it was said to be 99% safe so what are the chances that the positive test I was holding in my hand was correct? But it was. My soul died that day. He wanted to keep it and tell his wife and be with me, but how could I??? It was my cousins husband! it was my family's trust! It was a marriage I was ruining. Until that moment, I never saw how wrong that was. It was a kid's life torn apart because her dad was running off with her mom's cousin. He paid for the abortion and took me there. He waited in the waiting room while they put me out. I woke up empty—pain free and physically fine but my heart and soul and entire existence was shattered and meaningless and dark and changed. I was the scum of the earth—the most vile and disgusting human being, so unworthy of anything good.

Not a day goes by where I don't think of what I have done—not once, not even twice, but three times! I cannot tell you why I went through with them all except for the fact that I was terrified, selfish, and a coward. I was brave enough to get myself into the situations I was in but when it came to dealing with my sins, I took the easy way out—except it isn't the easy way out because your family may shun you, talk about you, be disgusted by you or even refuse to have anything to do with you. You may be branded a slut or a whore but the truth of the matter is that all of the above are better then killing your flesh and blood. If I had kept my first child and been a teen mom, the other two abortions would never have happened. The abuse and hurt and low self esteem would have ended because I would have had a reason to live and something to live for. I am married now with a beautiful little girl who is my whole world, and I am hers. I am an amazing mom, but it is too late. I feel unworthy and disgusting every day of my life because I have three angels whom I never gave the chance to breath or speak or laugh. I think about what I did every single day! if I could go back and redo what I did, I would in a heart beat. I was told that God would never forgive a murderer, and I took three lives—so my payback is a life in eternal hell which I deserve.

I have asked God to forgive me. I have cried out to him at all hours of the night when I want to hold my babies and scream that I am sorry, that I love them, that I didn't know better that I was young and foolish and scared! But I did know better, and every single person reading this thread does too. There is always another option. Be brave, please, I beg you. Your baby needs to live, to breath, to laugh and feel you hold and protect them. Choose life, or you will forever be a prisoner of this cruel and disgusting sin.