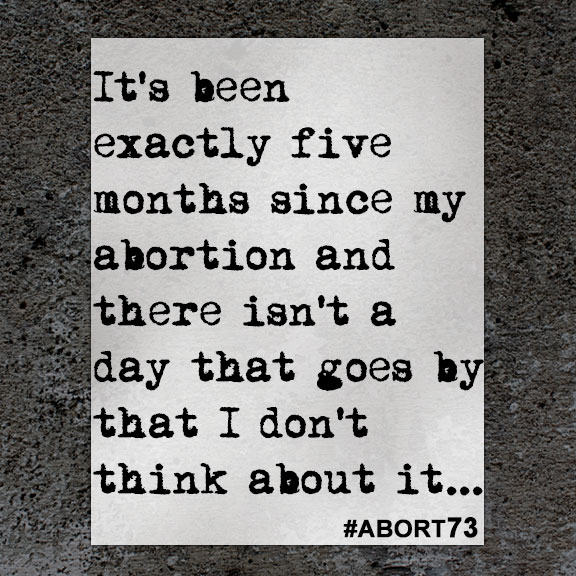 It's been exactly five months since my abortion and there isn't a day that goes by that I don't think about it...

I was exactly six weeks when I had the abortion; my baby's heart literally just started beating only for me to take it away. They gave me counseling; they told me that this was something that God could forgive me for. They gave me false hope for the future, told me that this was something that one day I’d think about and not tear up. They handed me tissues when I cried and expressed my fears about what I was about to do. They made it seem like one day I wouldn't regret my decision.

It's been exactly five months since my abortion and there isn't a day that goes by that I don't think about it. Was it a girl? A boy? Even though my pregnancy was short, it was difficult. I had symptoms that kept me up at night and made me suffer throughout the day. There was even a moment when I thought that I could actually do this—have a baby, go to school, have a job, and finally start my life. I was young, barely 19, and my boyfriend was willing to support any decision that I made. I wish I would've known that the physical pain I faced during my pregnancy was nothing in comparison to the psychological and emotional pain I deal with every day. I wish I would've known that I would regret the decision the minute the operation happened. If you're thinking about getting an abortion, don't. Nothing in this world is worth the pain you'll be faced with once your child is gone. The minute you conceive, you're a mother. The most important thing in your life is your child, the child that is growing and flourishing inside of you, the child that depends on you for literally everything. The innocent, sweet baby boy or girl that doesn't deserve to be ripped away from the world is dependent on you and only you. I would kill to have my baby back. I've even tried to trick my boyfriend into conceiving again so I could have something that brings me true happiness. Please, I'm begging you, think twice before you do something that you'll regret for the rest of your life.