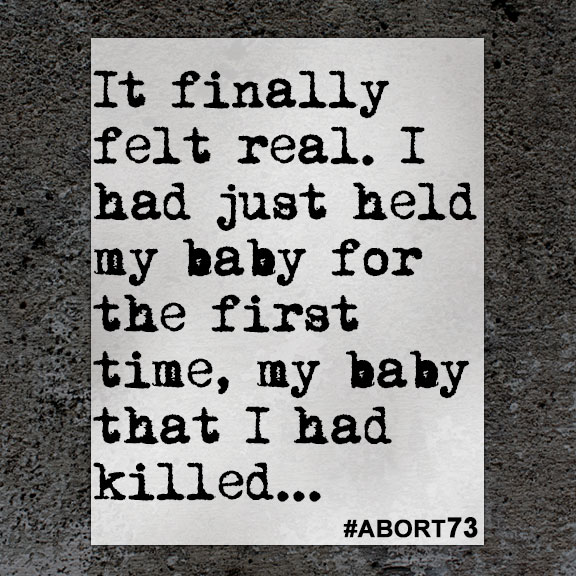 It finally felt real. I had just held my baby for the first time, my baby that I had killed...

I had just turned 20 and was going through a hard time. I was troubled with anxiety disorder and depression as a result of it. My grandpa was also very sick, dying in fact, and I was struggling to find a way to deal with it. I was feeling alone and upset when a boy I used to know texted me asking to hang out. By “hang out” he meant have sex, which I would normally say “no” to as he isn't a very nice person, but I was in a low mood and wanted some affection so I agreed. We did the deed with a condom and I left. My period was due a couple weeks later, but it didn't arrive. I just assumed the stress was making it late, so after taking a pregnancy test that showed up negative I put it to the back of my mind.

It got to the stage where my period was 18 days late, so I went to my doctor for answers. She made me take a test and it was positive. As soon as she told me, I burst out crying. I hadn't even had time to process before she was telling me I would need to make a decision soon and would have to get off my anti-depressant immediately. She then rang up to book me an early scan the next day as I was having some pain.

I had the scan which confirmed I was 6-weeks pregnant. I saw the tiny little baby on the screen and heard its heart beat, but I didn't feel anything—not joy or fear, just nothing. A week passed, and I didn't tell anyone but my best friend and brother who both told me it was my decision.

At 7 weeks I began feeling incredibly sick and tired every day. I lay in bed as often as I could. I have a phobia of vomiting so when it came to the point I knew I was about to vomit I started crying. My mum then came upstairs and held my hair back. I told her I was pregnant and she was stunned, but told me she would support me. I looked abortion up online and saw that a medical abortion was only available up to 9 weeks in the closest clinic to me. I rang up and booked the appointment so I would have it in place if I chose to go through.

My mum told my dad who often joked about throwing me out if I ever did become pregnant. He was angry, but was ok after I told him I booked the appointment. I think that encouragement played a big part in my decision. The thought of disappointing my dad, the man I love and admire so much, was unbearable. I finally told the boy who instantly said, “I’ll just come over and kick you in the stomach until this is over. I don't want this. I’m too young. You cant keep it.”

I hung up crying. I thought to myself, “how can I bring a baby into the world with this boy as the father?” I couldn't imagine giving it a life not full of love. I was brought up with parents who were together and in love and that's what I had always imagined my baby would have if I ever had one. I only had a few days to decide; its an extremely hard decision to make in such a short time. I just kept thinking, “I can’t do this. I’m too young, and the timing is terrible and the baby won’t have a father.” So I decided upon the medical abortion as I had read it couldn't feel anything at 9 weeks.

My father drove me, and I had my blood pressure checked and was given an antibiotic, then sent home. I went back the next day and was given more antibiotics, then four tablets to melt in my gums. This took about 50 minutes, then I was allowed to go. I barely made it to the door before I started having cramps similar to period cramps. By the time I made it to the car I was struggling to walk, and it just got worse and worse. I took two Co-codamol, but the pain continued to get worse to the point I was screaming. I threw up twice from the pain and kept lying in different positions, trying to relieve the pain. I then soiled myself. This all happened while my dad was in the front seat driving, which was extremely embarrassing.

The pain continued at this level for 40 minutes until the tablets kicked in and it became bearable.  I got home, put a pad on, and lay with a water bottle. I started bleeding lightly and after about an hour it became so heavy that it leaked through my clothes. The pain started to become intense again, and I had the urge to push, so I sat on the toilet as the blood poured out. I then had bad diarrhea. I  was back and fourth from the toilet, changing the pad and having diarrhea until the pain got even worse. I barely made it to the toilet. I then felt something large come out. Without thinking, I got up, put my hand in the toilet, and picked it out. I glanced at it quickly and saw it was flesh colored and just about filled my palm. I instantly dropped it back in and started hysterically crying. I couldn't breathe. My mum tried comforting me, but it didn't work.

It finally felt real. I had just held my baby for the first time, my baby that I had killed. I cried for hours. My mum had picked it out and put it in a container. I then passed the after birth which felt similar and continued bleeding heavily but slightly less. Over the next few days I still had cramps, but they felt more like bad period cramps than contraction pain. I buried the baby in the garden. I tried to get back to my life doing the things I would do before and not thinking about it. The next week my grandpa passed and all I could think was that he had no choice in his death and neither did my baby. I made that choice for it; it didn't choose to be conceived. I chose to have sex, knowing pregnancy is a result. I felt like I had taken a life and the guilt was overwhelming.

It’s now been five weeks since the abortion, and I've just got my regular period—as if it never happened. But that hasn't stopped me going to sleep and waking up every morning thinking about it. Wondering what would have happened if I had kept it, wondering what I would look like at this stage in the pregnancy, thinking I might not be able to get pregnant again, and even if I could, would it be fair to have that baby but not this one? Wondering if the baby could feel the pain and if it actually knew what was happening, and was it scared? I feel numb and empty and often wonder if the baby was the thing that could have made me feel whole, given me a purpose, made me feel real love. I don't know if I regret my decision or if I just feel guilty about it. Tonight I sat thinking all these thoughts again and decided maybe it would help to write my story, so my advice to anyone making this decision: think it through completely. If you have any doubts, don't go through with it. Regret and guilt is something that can overwhelm and consume you, as I've found out for myself.