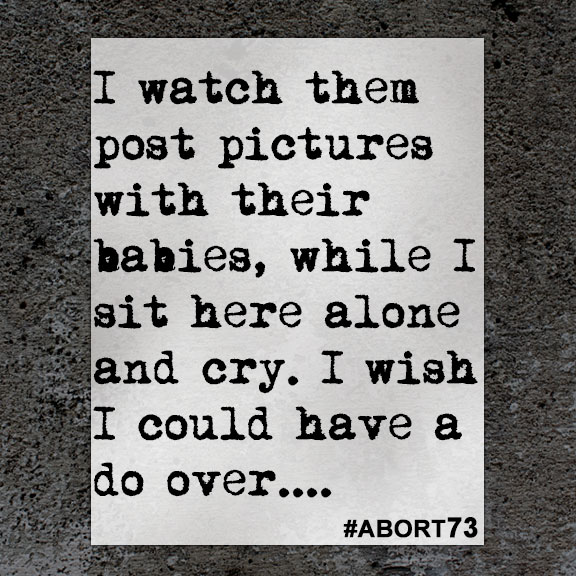 I watch them post pictures with their babies, while I sit here alone and cry. I wish I could have a do over...

I was 15 when I got pregnant. I never thought it would happen to me. I understood the consequences of sex, but just thought it wouldn't happen. At the end of August I found out I was 6 weeks pregnant. Everything changed. A couple months prior, I had just quit injecting meth and broken up with the baby's father—who was abusive and did terrible things to me. I quit everything once I found out. I swore even if I didn't keep it, I wanted to make sure my little bean was healthy until that choice was made. In a couple months I would be 16. I really didn't have a stable home. I ran away from my parents almost a year earlier. I ended up moving in with a guy. I took prenatal pills, and I ate good. Anything for my little man (I was convinced it was a boy).

At 9 weeks I went in for an early scan because the doctors were unsure of my due date, due to irregular periods. I saw my little one on the screen and boy did he look handsome. I could see his arms, his legs, and his beautiful head. I knew at that instant I wanted to keep my baby, but knew it would be near impossible. The nurse printed out two pictures of him. It’s all I have left of him (or her) now. In the coming weeks, I talked to my parents and decided to go home and go back to school. Not long afterwards, they found out I was pregnant. My mom at the time had an four-month-old of her own. My mother gave me an option: I could stay there, go to school, become someone. OR I could leave. Both of my parents told me their house did not have room for two babies. So ultimately they gave me the choice to be homeless (again) with a child or have an abortion. I was so scared. So I chose to abort my baby.

My mom dragged me to the office, me pretending to be okay. The doctor was nice. Since I was almost 12 weeks already, she booked the surgery the next week. I was 12 weeks 3 days when I shoved those little pills up my vagina. There was no going back now. I went into the operation room with a brave face. I woke up still loopy, screaming that my ex had done this to me, that he took my baby. My mom was terrified. She almost called my boyfriend, whom she hated, to come and help calm me.

Flash forward; over a year has passed. During that year I barely thought of my little one. Until recently. I sit here almost every morning, and look at those ultrasound pictures for so long, and cry. I wonder if my baby would have his daddy's striking blue eyes or my wild curly hair. I wish I could kiss those fingers and toes. Or just cradle him in my arms. I will be 18 this year, and this is my biggest regret.  I know it would have been hard, but I believe it would have been worth it. Two girls I know got pregnant the same time I did; their son and daughter are now over a year old. The same age my little one would be. They both tell me they wouldn't give up motherhood for anything. I watch them post pictures with their babies, while I sit here alone and cry. I wish I could have a do over. So please, if you’re thinking about abortion, please truly think it through. I made a hasty decision. Don't make the same mistake I made. I am now in counseling for depression. I beg you just to think it over. If you can look at yourself a year down the road, or even longer with the decision you made. I know I have a hard time living with the one I made. I have several times tried to commit suicide. So please, please, please. Think.