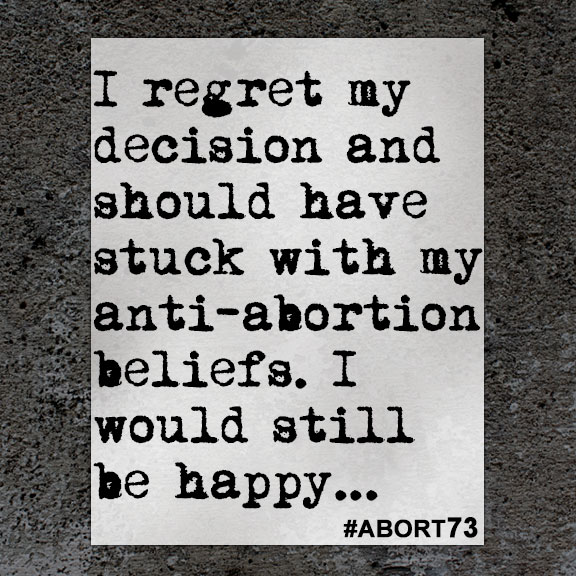 I regret my decision and should have stuck with my anti-abortion beliefs. I would still be happy...

It was the summer before my sophomore year of college. I had known the guy for two years, and I finally decided to give hims some sort of a chance, but I didn't want a relationship. I kept telling him that, and he understood. One night we were hanging out and we had intercourse. Back track to May of before this summer, I broke up with my boyfriend of over a year, and I felt a little lonely. This guy helped me through my break up, and it worked. Our relationship, or whatever you would like to call having sex and having feelings, grew into something I can't explain. Maybe I fell in love with him, but all I knew is I did not want a relationship because I planned to move back home, five states away, and did not want to get hurt again.

It was July, right after I took this guy with me to Warped tour, when I found out—and I was happy. I remember getting up early in the morning to take a pregnancy test. It came up so fast, that positive sign on the stick, and I remember a couple tears running down my cheek. Me, pregnant? This was the time to turn around my life, and be a better person for another human being. I could not believe what I was seeing, but the lines appeared within a minute. I was ready to have this baby.

It took me awhile to tell my mom. It was the day before my first doctor appointment, and she told me to get out of the house so she could have some alone time to think. I thought she hated me, but then she reminded me that she too was 19 and pregnant, but she had an abortion. At this point I was completely against abortion; a life is a life no matter how small. No matter who told me what, I was keeping my baby.

But then my mother forced me to talk to my grandpa, because he really wanted to talk to me after my mom had told him that I was pregnant. I talked to him, and something he said changed my mind. I made a rash decision to cancel my next doctor appointment and call up Planned Parenthood to schedule an abortion.

If you're still reading at this point, thank you. My mom took me eight hours away to get the first pill, then we drove home. One of my guy friends stayed with me the next day while my mom had to work, and he stayed with me through everything. This guy that stayed with me was not the father. The father was not happy with my decision, and he was serving five days in jail so he couldn't be with me anyway. But the next day was the worst after I took the last pill. The pain was worse than period cramps, but that wasn't the worst part. The worst part is now. Three months after having the abortion, I am now ready to have a relationship with the father, but he is not. All I think about is my baby that I let go, especially since the father’s brother is now having a kid, and the mom is my friend. It's hard, I regret my decision and should have stuck with my anti-abortion beliefs. I would still be happy.

I really wish I did not have the abortion. Because now I have an IUD in, and I just want to take it out and try to have another baby to possibly fix what I did.