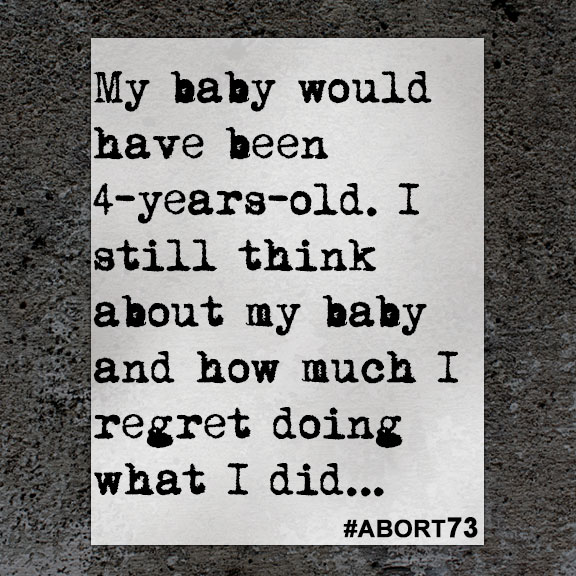 My baby would have been 4-years-old. I still think about my baby and how much I regret doing what I did...

I was 23, with a 3-year-old little girl, living with my boyfriend, and we were not on good terms. I was going to school to get my high school diploma. We were not planning on having a baby. But I ended up pregnant; we were not being as careful as I thought we were. After I found out I was pregnant, I told my boyfriend. He was not really happy. His only response was, “I told you I didn’t want another kid.”

At that moment I felt the lowest I had ever felt. I didn’t tell anyone about my pregnancy, only a friend and my boyfriend knew. We decided that it was best if I had an abortion, so we made an appointment. I went with my friend. I felt scared and nervous and thought maybe he would change his mind. It was a little late because they called me and did an ultrasound, gave me a gown, and put me to sleep. When I woke up I felt so empty, and even more confused.

I became really depressed; I stopped going to school. And I would cry every day. I often think about my baby, how it would have looked. My baby would have been 4-years-old. I still think about my baby and how much I regret doing what I did. I have always been against abortion, but now I feel like such a hypocrite. I asked god to forgive me, but I cant forgive myself for the terrible mistake I made. I just hope one day I can have a chance to have another baby. And I hope my baby knows how sorry I am for taking its life.