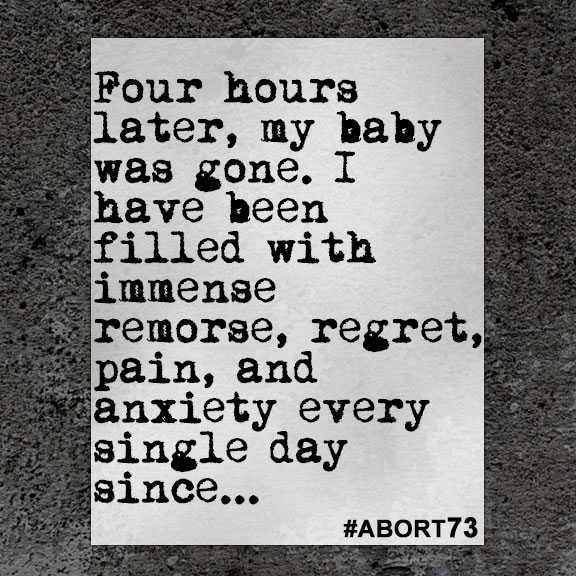 Four hours later, my baby was gone. I have been filled with immense remorse, regret, pain, and anxiety every single day since...

My shameful story of abortion is preceded by a shameful story of an almost-3-year affair with a married man. I've always told myself that he was my soulmate, the only person who was truly there for me. I've been through a lifetime of tragedies and my self esteem is almost non existent. He made me feel good about myself. We always talked and fantasized about him getting out of his own marriage—about running off and eloping and starting our own family together. He always told me that if I ended up pregnant, he would come running home to me. On August 23, 2016, I went to the store and bought a test. I went home and it lit up pregnant almost immediately. My whole world changed in a matter of moments. Panic set in. At 3 am I received a text from him: “I love you.” My response: “I’m pregnant.” I didn't hear anything back.

I have always been pro-life. When I did finally hear back from him the next day, the false promises turned into reality: The timing wasn't right; he couldn't go through with it and end his marriage; we were irresponsible; when are you going to make an appointment with the clinic? I was devastated. On the 25th, I drove two hours to a place I never ever wanted to be. Walking in the clinic is one of the most scary experiences I've ever been through, and I've been through some truly terrifying things. It felt so cold in there—a heart wrenching coldness. Women sat around looking at their own feet, with panic and regret in their eyes. I wondered if any of their stories were like mine.

I was called back to get an ultrasound and was too early for anything to show. They had me take a test and it came back positive. They told me to come back the following month. I wasn't in my right frame of mind and didn't want to bond with my baby inside of me because I knew I couldn't keep it. I prayed to God (screaming for forgiveness) and begging Him to let the baby go naturally (miscarriage). I never wanted to go back to that cold scary place ever again. I started bleeding terribly the weekend before my second appointment on September 17. I went to my ObGyn who said that the bleeding was normal and he would watch me—but that I was at risk for a miscarriage. I continued to bleed all week long. I told the one person who knew about the situation that I was going to put it off another week to see what would happen. She got me up the very next day bright and early and told me I couldn't put it off. She drove me back up there.

Four hours later, my baby was gone. I have been filled with immense remorse, regret, pain, and anxiety every single day since. I started drinking heavily to cope, and I've never been a drinker my entire life. I'm severely depressed and have panic attacks every day. I can't undo what I've done. The most heart-wrenching part is that I lost a sibling earlier this year and my baby would have been born around my sibling’s birthday next year. Don't do what I and so many others have done. Look at other options, adoption, etc. The pain of an abortion goes so much deeper than the physical pain—the mental, emotional pain is unlike anything I've ever been through.