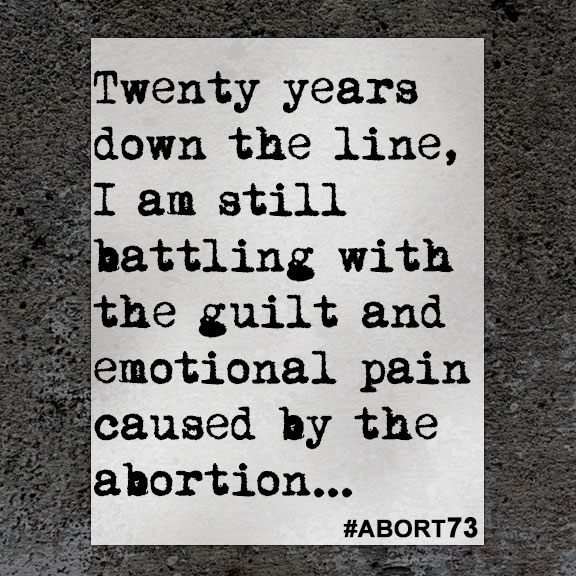 Twenty years down the line, I am still battling with the guilt and emotional pain caused by the abortion...

I had just turned 18 I found out I was pregnant. My boyfriend was only a few years older than me. We had met two years before through mutual friends. He seemed a great guy. He was loving, protective, caring and very funny. How could I not fall in love with this guy? Unfortunately, that did not last long; after the honeymoon period, his behaviour started to change. By the time I realised that I was in an abusive relationship, my self-esteem and self-respect had been chipped away so dramatically that I did not know who I was or what I wanted any longer. It was at that low point of my life when I found out I was pregnant. Fully supported (and pushed) by my boyfriend, I decided to undergo an induced abortion. The realisation of what I had done left me emotionally devastated. I struggled to cope with the excruciating guilt, regret and shame of my action. My boyfriend became even more abusive after that. The physical battering became more frequent and the insults for what I had done became the only form of communication. Eventually, but not before an explosive act of physical abuse, I found the strength to end the relationship. The pain of my loss and the guilt never left me. I hoped they would go away one day when I would have a perfect family and become pregnant again. Unfortunately, a few years later, after having been diagnosed with a severe form of endometriosis and surgically treated for that, I was told I could no longer have children. Twenty years down the line, I am still battling with the guilt and emotional pain caused by the abortion. I never realised that would have been my only chance of being pregnant.