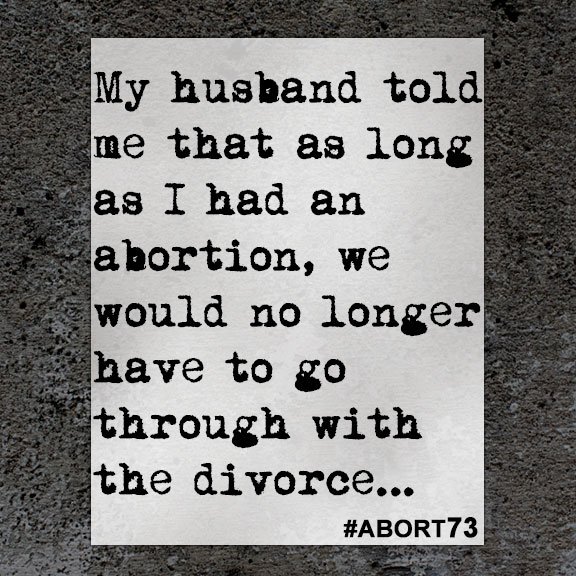 My husband told me that as long as I had an abortion, we would no longer have to go through with the divorce...

I was 20 when I found out I was pregnant. I cried as soon as I saw the two lines because I was both happy and devastated. I was devastated because I didn't know who the father was. I had cheated on my husband, and I already knew that what I did was horrible. But my husband and I had been having problems, and he told me he wanted a divorce. So I ended up sleeping with another man who was also going through a divorce. His wife ended up finding out and telling my husband, so my husband confronted me about this. Thats when I told him I was late. We ended up going to Walmart to buy a pregnancy test, and I took it as soon as we got home. The pregnancy test came back positive. I was really happy because the doctor had told me that I would not be able to be pregnant, and I was also devastated because I had no idea who the father was. My husband was beyond upset saying that he was not ready to be a father if the child was his, and that I could not have the child. Meanwhile the other man was beyond happy that I was pregnant. The next day my husband told me that as long as I had an abortion, we would no longer have to go through with the divorce. And I told him that I needed time to think through this because I did not believe in abortion. I cried and told him that I didn't want to kill the baby and that I would just give it up for adoption, but he said that the only way to save our marriage was to go through with the abortion. I not only had him pressuring me into the abortion, but I also had the other man’s wife and entire family calling me and demanding me to have this abortion. I told them I would only go through with it if he called me and told me he wanted me to get this done. He ended up calling me to tell me that I needed to get the abortion because he wanted to fix his marriage as well. So I ended up going through with the abortion because I felt pressured into doing so. Deep down I wanted to keep my child, but no one was supporting me. My husband ended up being there for me through the entire process. I still cry because I wish I never went through with it. It was very painful emotionally, physically, and mentally. My baby would have been born on February 4, 2017. DO NOT GO THROUGH WITH THE ABORTION if deep down you want the baby. You will regret it. I regret it and hate myself for doing it.