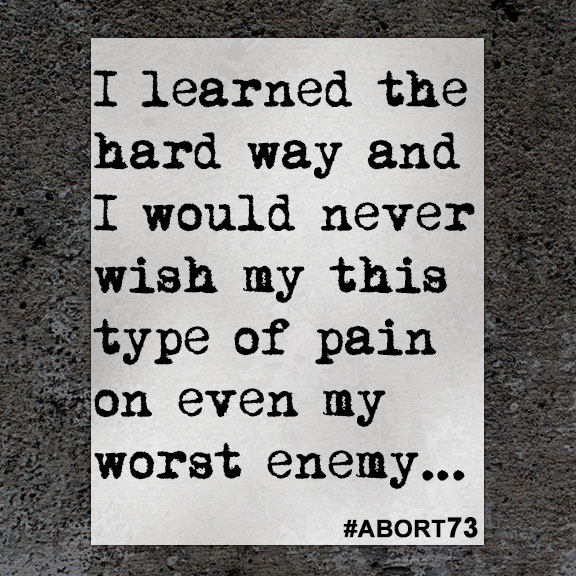 I learned the hard way and I would never wish my this type of pain on even my worst enemy...

I am in the military and was stationed in Italy when I found out I was pregnant back in May. I was with this guy on and off. It wasn't a serious relationship. We had talked about being together in the future, but when I told him I was pregnant it was a complete shock to him—as if we ever used protection. At first, I told him I was going to keep it. Then I did not hear from him in two weeks.

During that two weeks I was full of excitement because I was pregnant, but I also had a lot of red flags popping up. "If this guy isn't talking to me now, he's definitely not going to be there for the baby." All types of things went through my head. I was sick and throwing up every single day. I had no one there for me except one friend, but she kept telling me to not keep the baby. It was a constant conversation with this girl about why I didn't need to be having this guy's baby.

Pregnancy hormones are no joke because one day this girl really got to me. I ended up deciding to get an abortion. Since I am in the military, I assumed the charges would be covered. Little did I know, Tricare does not support abortions. The military won't let you join as a single mother, but won't help you stop from becoming a single mother? It didn't make sense to me, but I dealt with it because I did not want to be pregnant anymore.

I told the father of the baby, and he told me he would be there for me and support me through the entire process. At this point, I was 8-weeks pregnant and I had my first ultrasound. Of course I was alone. I only went in to get information about an abortion, but I was still filled with joy because there was life inside of me. Here's the part that I will never get out of my head. In Italy, the procedure is completely free if you are living in Europe. So I'm thinking in my head, "I live here because I am stationed here." I was wrong! Because I am American, I had to pay—because I wasn't living there willingly. I asked how much it cost and the nurse told me 1400 Euro. It only costs from $300-$500 in the states but over $1000 in Europe? For a ten minute procedure?

I was already pissed, but the baby father said he would go half with me, so I didn't feel too alone. A day before the procedure I was supposed to pay, but the baby father did not give me his portion yet. The hospital told me I could pay right before the surgery, so I said "OK." I get to my car and see a text from the baby father saying that he is broke. It pissed me off because I told him that if he didn't help, I was going to keep the baby. He responded, "do what you gotta do." Another red flag. This guy was never going to be there!

I was hurt because at the very least I thought this guy was my friend! I had all night to think, which wasn't enough time, looking back now. I continued to forward with the surgery the next day. When I went to pay before the surgery, the price went completely up! It was 2500 EURO! I never felt so taken advantage of. I've heard plenty of stories about Italians taking advantage of Americans, and I am living proof. I was torn between paying and keeping the baby—and just being a single mother. At the moment, I was full of emotions and wanted nothing to do with the father. I ended up paying almost $3,000 just to have an abortion.

I was in the waiting room with the other girls about to get an abortion. This wasn't their first times there, which makes sense since it was free for all of them. It was awkward because they had us all in the room going one by one, and each girl left like nothing happened. I was the only one to leave the hospital in soooo much pain. I went to bed crying, feeling empty. I was not at all relieved like people said I would feel. I went out to the club (like a dumbass) and ended up seeing the father.

I have been drinking, trying to numb the pain, and I am literally crying like I never cried before. I was panicking and having a real panic attack. I am still full of all types of hormones and everything gets me sad, angry, scared. I felt every single terrible emotion possible. After a month went by, I thought I could go on with my life and try to forget the worst thing that could happen to anyone. But not a day goes by that I don’t think about my baby. I could have done it by myself, but I also wanted my child’s father to be there.

I'm still young and have a lot of time to have kids. But at the same time, kids don’t come planned. I am finally at the point of accepting that I cannot take back what I did. If anyone made it through this LONG story, I just want to say, abortion is no one's choice but YOUR OWN! Don’t let anyone try to convince you that your life will be terrible. I learned the hard way and I would never wish my this type of pain on even my worst enemy.