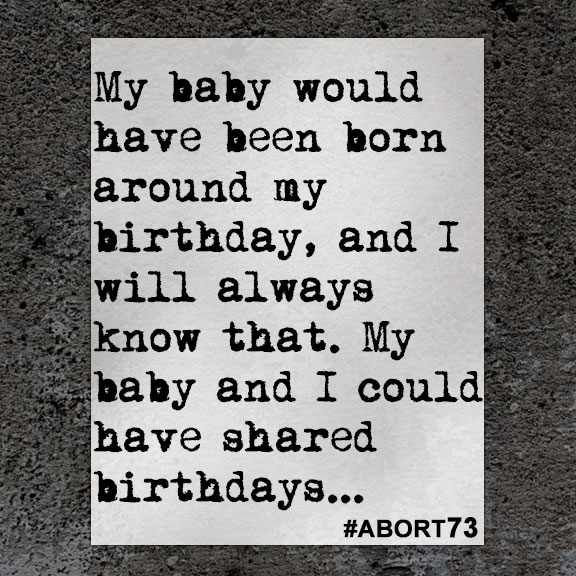 My baby would have been born around my birthday, and I will always know that. My baby and I could have shared birthdays...

August 21, 2016, was the date I found out I was pregnant. The first day of my last period was the 20th of July, and the date of the abortion was the 21st of September. I have been with my boyfriend for a little more than two years now. I found out I was pregnant because I dreamed about a positive pregnancy test. I had not missed my period yet, but I was a bit scared. I bought the tests later on that day and it came out positive. I called my boyfriend immediately, just to hear him talk about options I had. That broke my heart. Later on that night, I listened to him read me articles about different abortion methods for about an hour. It had me doubting. He said that he wanted this baby, but everything else showed me otherwise. I told my mother and my sister, but they couldn’t believe it. I went to two clinics and an ob-gyn to make sure I really was pregnant—because I have cysts that can cause a false positive. Everything came out positive; and I was 5 weeks along.

It was finally time to tell my father. My boyfriend and I sat down on the kitchen table while my dad was washing the dishes. He bluntly told my dad, and it looked like he wanted to cry. It was so heart-wrenching. I moved in with my boyfriend at his parents house, which was four hours away from mine. It was such a hard transition but I wanted to be with him. For those those three lonely weeks I felt unwanted. My mother and sister didn’t really guide me. They didn’t give me any advice other than, "you're old enough to know what you’re doing.” Thats all the advice I got. I even confronted my mom about why she didn’t help me or give me any advice or guidance, but I never received any. I felt so alone. Even after I moved in with my boyfriend, the worst feeling is knowing he is there but still feeling more alone than ever. I felt so alone in this pregnancy that I was the one who suggested the abortion. I felt like I was a burden to everyone. I thought it would be better for everybody.

My boyfriend didn’t oppose my decision and basically said that it was up to me. That didn’t help at all. I made the appointment and cried before and after it happened. I always try to please everyone, but in the end it is you who always gets hurt. It’s something irreversible that you can never go back on. My baby would have been born around my birthday, and I will always know that. My baby and I could have shared birthdays. I am suffering every day. I have never felt so much pain or regret. Only those who have been through this situation can understand. I am so heartbroken, and this decision I made will forever haunt me. I am so sorry, my baby.