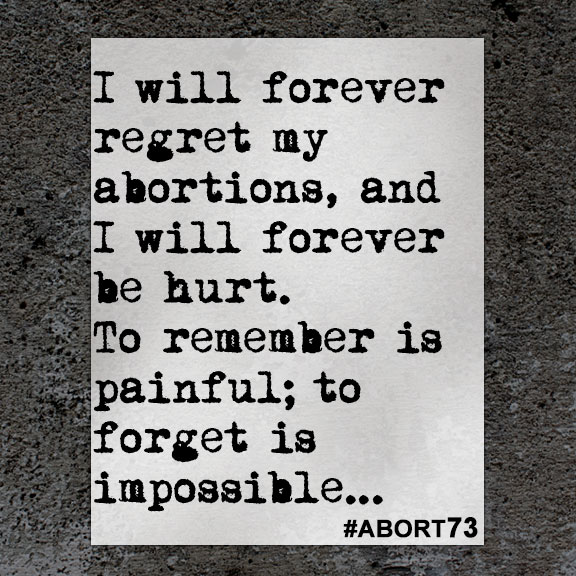 I met the father of my two older children in 2004. We dated for a very long time. In 2014, I wasn't happy anymore so I met someone else, had sex, and got pregnant. I was so scared about what the father of my other two kids was going to say. He is a great man; he said he would be there for me, but Satan kept whispering in my ear. I started thinking that my mom had four kids with one man, my father, and I wanted to be like her. I went ahead and made an appointment for an abortion—on March 12, 2014. I was nervous when I arrived at the clinic, then I was called into a room. They gave me a shot and all I remember was lying in that bed. I wasn't too sure what they were doing. That pain medicine was too strong. I went to recovery, and my mind went back to normal. I stared feeling empty. Something was missing; it was my baby. I was always against abortion until I went through it. A few months went by, and I became an alcoholic. I got pregnant again by another man and had an abortion all over again. Then months later I met another guy, got pregnant, and was considering abortion—but I couldn't do it. I thank God for not letting me. I have a 6-month-old baby girl and every time I look into her eyes I see pure love. I will forever regret my abortions, and I will forever be hurt. To remember is painful; to forget is impossible.