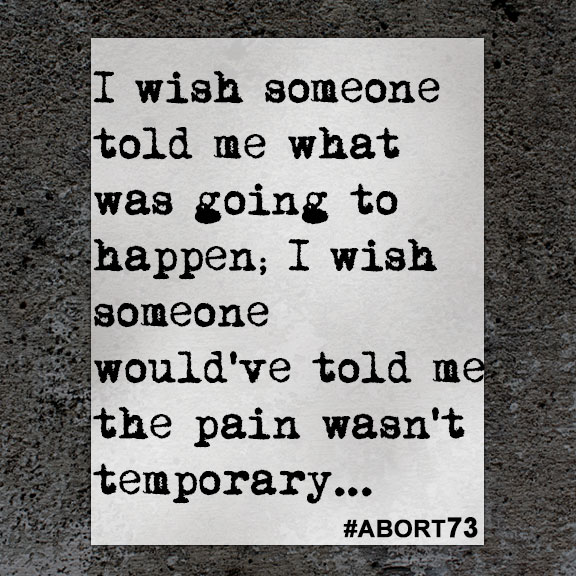 I was 15. After a few occasional hook ups with one of my close guy friends, I took a test and found out I was pregnant. I was scared and tried leaning on him for support. But naturally, football and cars were not worth giving up for the sake of our child’s life. He begged me and begged me to get an abortion. He even threatened telling people in my family who I didn’t want to know. After four months, and finding out I was carrying a little girl, I caved. I wish I had supportive friends and family to talk me out of it. I was a baby myself; I had no idea about the choice I was making. At my appointment, they told me I would feel some pressure for a while and to look up at the ceiling and count—and if I was religious, to pray. They had a baby blue ceiling with white clouds. The image of that haunts me every time I go outside. When all was done, I remember going home that night and having nightmares. I wish someone told me what was going to happen; I wish someone would’ve told me the pain wasn't temporary. And now two years later, the father of our child is trying to conceive a baby with his new girlfriend. I will forever feel worthless inside for my decision.