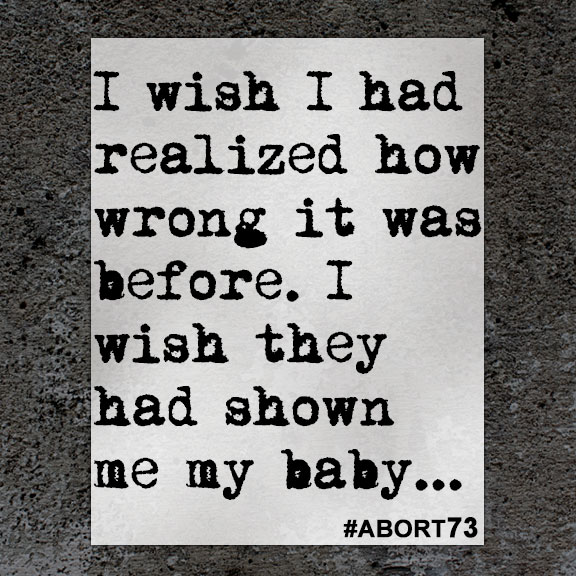 I wish I had realized how wrong it was before. I wish they had shown me my baby...

In 2012 I met a man who I quickly got engaged to. He was a born-Egyptian, naturalized to US citizen due to his service as a Marine. He was a Muslim (although hardly practicing) and very proud of his service in the Marines. He actually became a Marine because of how he was treated after 9/11. He wanted to prove to racist Americans that he is a good man who loves America.

Anyway, I was into smoking cannabis at the time with occasional experimental use of other substances, as well as a social drinker. I was into all kings of "wacky" new age beliefs, and I slept around. Before I met him, I prayed that God would help me meet someone that would help me become a better person. When I met this guy, we had sex soon after and I fell for him right after that. We debated frequently, and I liked that challenge at the time. He knew I wanted to become a better person, and he ended up kinda making me his "project.” We got engaged. We went through a lot of rocky times. He even tricked his Egyptian wife into coming to the US, not telling her about me, so that she would bring his kids over here. She moved in with us.

We were trying to get me pregnant and eventually it worked. Before this happened, I had left him and come right back multiple times. We were always fighting. We were lucky if we went three days without him getting upset. No matter how hard I tried, I could never make him happy. Everything I did bothered him, even the way I sat up straight. It was just bad. I got pregnant and got intense symptoms of pregnancy. I could barely stand up for 20 minutes. I got bad body odor. I couldn't eat chicken at all. But I wasn't allowed to "blame it on the pregnancy.” I had to stay silent about the symptoms.

It's a bit of a blur at this time, but around 12 weeks I knew I had to leave him. I asked if he would take care of the baby until I was able to and he said yes. Then I looked into the situation with tarot cards and asked someone I knew for advice as well. He didn't like that I looked elsewhere to make my decision, so he said he would no longer take care of the baby. I went to the clinic and couldn't make the decision to go through the first time. I came back a week later and did it.

Basically, first they looked at the baby with ultrasound. I didn't get shown it. I wish I had, so maybe I would have changed my mind. Next, I got called to a room with other girls and a changing room. There, you get changed into a gown and put your own clothes in a basket. Then I got called from there when it was my turn for the procedure. I got up on the table, got the stuff that knocks you out, which happened within seconds, and then I was woken up in another chair in a room where you get back to being awake enough to walk out. I was in pain. Soon after I left. The abortion happened at 13 weeks—the very beginning of the second trimester.

I did not regret what happened until later. I searched on the internet before it happened to see when the soul supposedly entered the fetus. I chose to believe it didn't happen until later on. Well, I have finally found faith in Yahshua (Jesus), and I now realize just how alive and precious that baby was from the very beginning. Abortion has been around for a long time, and it has always been wrong. I should have made excuses and found a way to keep that little one, not get rid of it. I wish it had not been so easy to get it done; it was FREE. Thanks, Obamacare. How many children have been murdered by the taxpayers' money? Where have all the bodies of these little ones gone? Please do not go through with an abortion. It is WRONG. It is MURDER. There are other options and they are FAR better. I wish I had realized how wrong it was before. I wish they had shown me my baby. I wish the person I had talked to had told me not to do it, but they actually work for Planned Parenthood so they don't even see anything wrong with it.

I hope I will at least get to meet my baby in heaven. I may not have known it was wrong before, but now I do and so I can be forgiven for that sin because I have truly repented and would never ever do that again or support anyone else's decision to have it done.

Please don't get an abortion!!!!