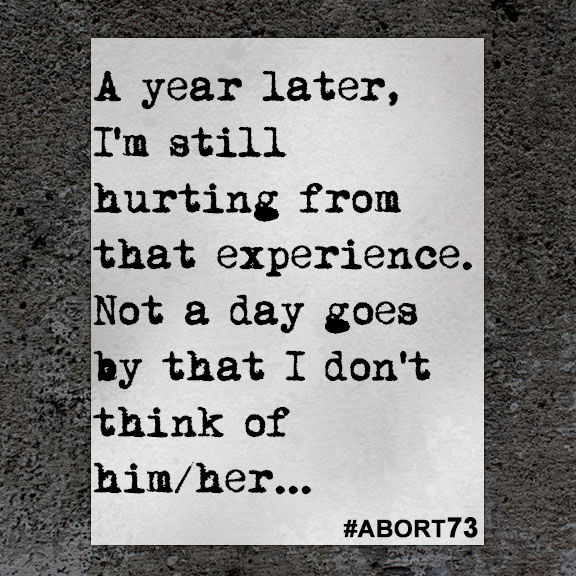 A year later, I'm still hurting from that experience. Not a day goes by that I don't think of him/her...

I was 14 years old when I did my abortion. The father, my boyfriend at the time, was 13 years older than me and was from another country. And my mum was gonna kill me if she found out. Being her only daughter, I was scared to disappoint her. The shame I would bring to my family and friends. Well here's my story. We had unprotected sex on the first day we met, and I was on my period. We had sex almost every day since the schools were closed, and I had all the time in the world. We weren't even in a relationship at the time. It was stupid of me, I know. A month later, I noticed that my boobs were swelling and hurting. I didn't think much of it until I missed my period in July. Aunt Flow normally came at the end of the month. I told him, and he suggested that I do a pregnancy test—which had two lines. I was so scared and confused. I don't remember feeling happy to have someone growing inside of me. He was supportive and did all he should have done, but I just couldn't comprehend the disappointment my mum would feel. So after two weeks, I decided to have an abortion. He got me the pills, and I did it at home all myself. On the 5th of August, I killed my baby. I took the pills in the afternoon and went to bed. Four hours later I woke up, due to the excruciating pain I felt in my abdomen. When I stood up from my bed, a river of blood started flowing and I remember feeling dizzy and nauseous, but I had to get to the bathroom which was only four feet from my room. But it felt like kilometers away. I was 4-5 weeks pregnant, so the clots weren't too thick but every time I felt one, I thought, “That's another piece of my baby.” I bled for almost three weeks and then it started to subside. After all the physical part was done, the emotional part began. I had a sense of relief, guilt, anger, and sadness, all at the same time. A year later, I'm still hurting from that experience. Not a day goes by that I don't think of him/her. It was after it left my body that I realized that I actually loved him/her. If you're considering abortion, please abort that thought. That choice shall haunt you forever.