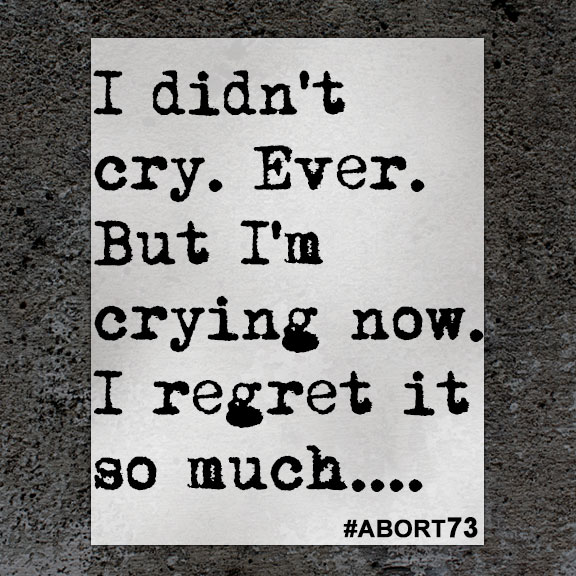 So, it's my birthday, July 5, and it's about 1 am in the morning. I lie here wondering why I feel so emotional and why I feel like something is missing. This isn't something that I think about daily, but I have to be honest with myself when trying to figure out why I feel so sad.

I met my boyfriend about two years ago. He's AMAZING! He's 26, a college graduate with no kids. Truly a sweetheart, great friend and supporter. My dad loves him. About six months into the relationship, I became pregnant. It was Valentine's Day, and we were in the moment. I took a Plan B within 12 hours the next day. Strangely, I knew it wouldn't work, and it didn't. We talked early on in the relationship how we were not ready for kids, and I said I if were to get pregnant and was not ready, I would have an abortion. I promise, this was discussed. He respected my thoughts but wasn't a supporter of abortions. At all.

Over the next few weeks I became very tired and hungry. The smell of foods I normally liked made me sick. I didn't throw up at all. Pretty much I knew I was pregnant immediately. I knew right away. I told him but hadn’t taken a test. He was confident in the Plan B. But I knew. My boyfriend worked at a pediatric clinic and loves children. He got me some clinical pregnancy tests and they turned positive. He was excited. I wasn't. He thought there was s chance. I knew there wasn’t.

I use a period tracker, so I calculated how far I was. I was actually dead on. Five weeks and one day when I got my abortion. He begged me not to. He cried. He screamed. He cried himself to sleep. I lay there, but he didn't want me to console him. But I never cried. I was never emotional. I had my mind made up. I went to get the abortion alone because he was out of the country at the time AND I wasn't sure how far I was. I was afraid it I waited any longer, I would have to get the surgical abortion. I was scared of that.

I didn't cry during the abortion pains or when I felt the fetus pass through. I didn't cry. Ever. But I'm crying now. I regret it so much. I'm lucky to have an amazing partner who is strong enough to stand by me. I would tell him what's bothering me, but I don't want him to be emotional. He's a good guy and did all he could to make this past weekend special for me. I hope to marry him one day and give him all the kids he wishes for. Plus one.