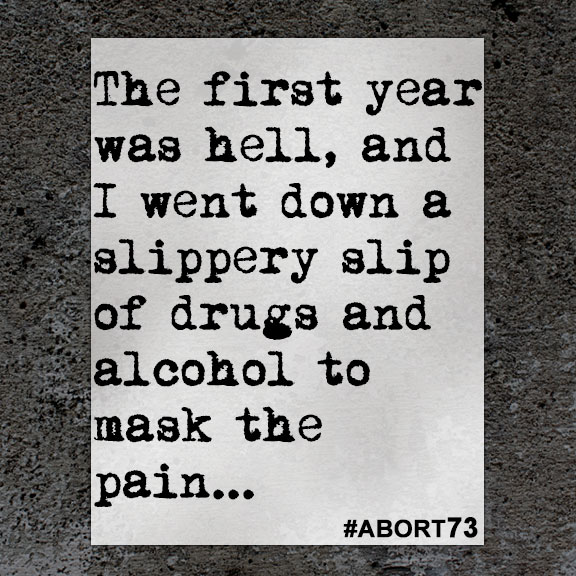 The first year was hell, and I went down a slippery slip of drugs and alcohol to mask the pain...

Two years ago, on the 3rd of February, I had a termination of pregnancy, I was 15. I had been with my partner for a mere six months, and I went to one of the most prestigious catholic schools in the area, where they never educated me about pregnancy since I wasn’t yet 16. The next eight weeks were the worst weeks of my life. I could barely stand on my own. Many people messaged to tell me not to abort and to adopt but as it went, I had my termination. I am now a qualified nurse. I found out shortly after my termination that my partner had been cheating on me, but we went on to date for almost two years. He refused to touch me during the days before my abortion and also refused to come with me, as he had school. A couple days later, he ditched school to get chips with his mates because obviously that was more important than being with me during this time. I thought in the beginning that it would never get better. I was constantly sad that I had lost the child I knew to be a girl, and I know that there were many families who were offering adoption to me. But being from a small rural town, I decided to abort anyway, to continue my medicinal studies. I am sorry to everyone that had high hopes of holding the princess I created in their arms. I wish nothing more than for you to have children of your own someday to adore as you would've adored my girl. The first year was hell, and I went down a slippery slip of drugs and alcohol to mask the pain. After that, I decided my princess wouldn't like to see me like this, and I applied for many scholarships, which I received to become the person I am today. I would like to tell you all that it does get better, slowly, as you learn to see that your unborn child would've wanted you to succeed in life. I wish you all the best of luck recovering and moving forward. We are here together.