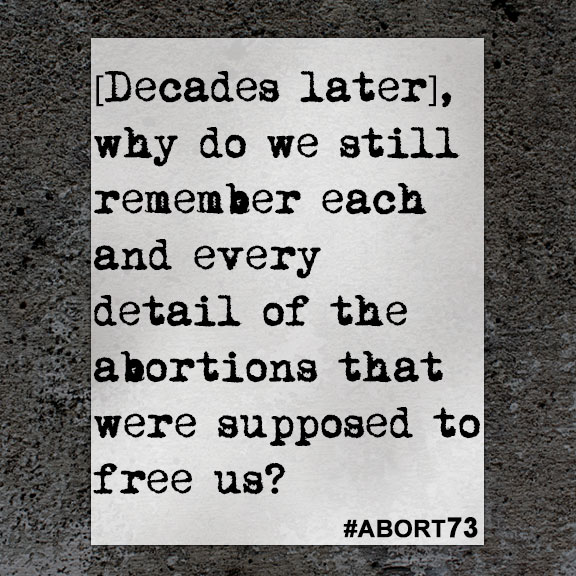 [Decades later], why do we still remember each and every detail of the abortions that were supposed to free us? ...

A few recent events compel me to write again, four years after submitting my story on February 2, 2012. Last year, my aborted baby's father found me online for the first time in all these years, after I left him back when I was 18. The first thing that I did when I got that message was put my head in my hands and cry in total shock. Like a vortex, I was instantly brought back to the day of my abortion in the most vicious and surreal way. I saw the smiling doctor clearly with his big mustache and dead eyes. I heard the whir of the scariest sound I have ever heard, the sound of the abortionist’s vacuum. I realize that loud noise is the deafening sound heard in hell.

I cried for days. Out of nowhere, I remembered the smell of his hair, his tattoos, his lop-sided smile, the details of conversations we had, how much I fell in love with him one summer night in a smoky bar—this man, the father of my first child. I remembered the heightened drive down I-95 together in a rusty old car, and how I wanted during that whole drive for him to turn to me and say, “Let’s have this baby.” But that didn’t happen and what replaced my hope was a numb acceptance that I couldn’t have a baby by myself.

Now, in 2016, the president of NARAL Pro-Choice America has given a speech about her abortion at the Democratic National Convention to an applauding audience, because it was “not the right time” to have a family. I think about how I bought into that thought too, convincing myself it was only tissue. What was this woman telling all those young girls who were watching enraptured, while hoping for the first female president?

I feel the speech was meant to exalt and maintain a billion dollar business—selling lies and body parts, offering propaganda and fetal cells for fast cash. I felt it was a nod to child sacrifice straight out of the Old Testament, but what do I know? I just regret my abortion from 30 years ago. My ex-boyfriend and I talked one time on the phone after his email. I told him the abortion was the biggest mistake of my life. He pleaded his apologies. I told him it is alright; I could have said “no” to his repeated requests for the abortion. I could have been stronger, but I wasn’t. I simply wasn't. Then silence.

How do you describe the wisdom of age to someone you loved in youth? We talked about the children we both went on to have. I now realize that when he called me back then, right after I moved out from our apartment, that when he said that he would have named our girl Michaela, he HAD named our baby Michaela. He had mourned the child too. I never thought that it mattered to him. He now has a beautiful teen daughter with red hair. He named her Michaela. Life does that to you when you live long enough. My heart was filled only with forgiveness for him, for the whole situation, because I loved our family once.

Less than six months later, one of my oldest and closest friends told me some amazing news. The daughter that she gave up for adoption when she was 15 had found her online. They have a blossoming relationship now; I’ll be seeing her next week with my dear friend, and we are going to have a little sangria, love on each other, and thank God for big favors. My friend told me what she hadn’t told me ever, in all our years of friendship. She said that she never told anyone except her girlfriends about the baby until she was six months pregnant, because she was afraid that the school counselor, the boyfriend, and maybe even her parents, would have forced her into an abortion. Although she decided to give her baby to be raised up in love by others, she still protected her daughter’s life, at 15.

Her daughter is a pediatrician now, with two little boys, and she makes sure to accept Medicaid to help single moms. Life does that to you when you live long enough.  After my first baby’s father found me, I have opened up more about my abortion with lifelong friends like I did with him. I had to just to deal with it. In doing so, other friends have told me their own heartbreaking stories. Once I spilled, they did too. I have heard stories that include mothers taking daughters to an out-of-town Planned Parenthood after school, boyfriends telling their girlfriends they were useless sluts, just to get them pregnant again, and one from a dear friend who is taking care of her dying mother. She had a saline abortion in college and has never become pregnant again because she thinks she would have been a terrible parent. She is one of the kindest people I know. All of us are now in or close to our 50s; why do we still remember each and every detail of the abortions that were supposed to free us?

I wrote all of this in the hopes that a young lady out there will be convinced of how beautiful she is, inside and out, no matter what has happened in her life and no matter what the people around her are saying to her. She is stronger than she knows. I don’t want her to feel my pain, or the pain countless others have, and countless others will. Keep that baby; he or she is already part of your heart forever, and you can do anything that you set your mind to do. Three decades later my past came back to me in an email, and because of that experience I discovered that those deep memories have never faded. I know that they will be with me until I die. My first baby is part of my heart, part of each and every beat, and I will dream, even if it is just a wish, that Michaela waits in heaven for her parents.