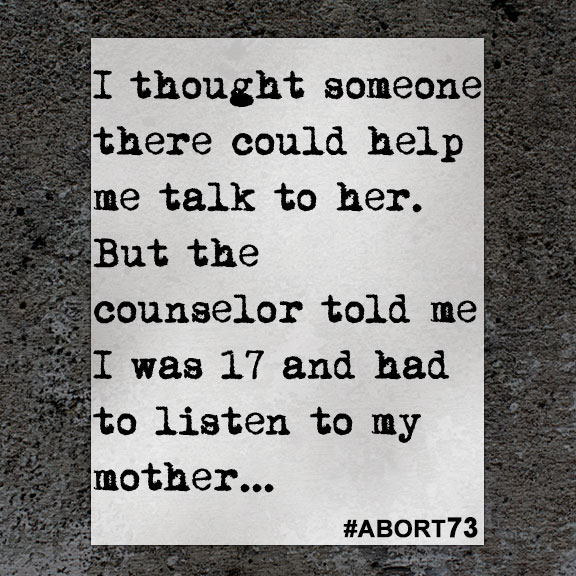 I thought someone there could help me talk to her. But the counselor told me I was 17 and had to listen to my mother...

My story is a little different. I was 17 when I told my mother I was pregnant. She said we had to take care of it before my father found out. I had to have an abortion. I told her I was too far along for that. She said she would figure it out. I know she had to come up with $250, which she made me feel guilty for. She made me feel so ashamed, and she was my mother. I thought I had to listen. The more I thought about it, the more I knew I could not go through with it. When we got to the hospital, I thought someone there could help me talk to her. But the counselor told me I was 17 and had to listen to my mother—and that the choice was already made, even after I told her I did not want to do this. Then they took me to another room were I was alone most of the time. I started crying, and told everyone that came in I did not want to do this, but what I said did not matter. They took me to another room were it took four to six people to hold me down to give me a needle in my stomach. A while later, they did it again. I tried to stop it; they said it was too late. I was still putting up a fight, so they gave me something else and had me lie on a bed until I went into labor. Then I gave birth. I overheard them talking, so I know my baby was a boy. Giving birth and knowing it was a boy made it worse. I don't even know if he lived or not. It was an awful thing that should have never happened. I was never the kind of person to think of suicide, but I did try a week or so afterwards. Every year around the middle of November I get so depressed—that's when it happened—and then again at the end of February when he would have been born. I have four kids now, but in my head and heart I have five. It’s something that will stay with you forever. After all these years, I finally talk about it a little.