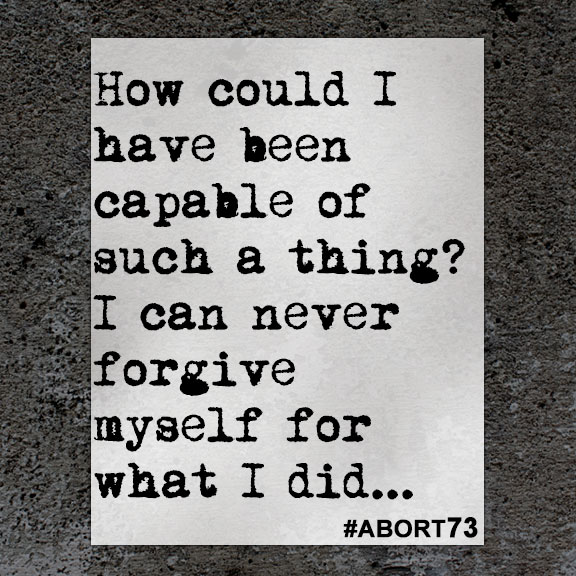 How could I have been capable of such a thing? I can never forgive myself for what I did...

I was 17 when I found out I was pregnant. I didn’t tell my boyfriend right away because I was so scared. My sister had just told my parents she was pregnant. All I thought was, “Oh God, how embarrassing for them for both their girls to be pregnant under the age of 20.” Not to mention, we came from a very Latino community, and pregnancy at a young age ran rampant. The judgment from my peers alone was unbearable to imagine. I was young and very self-centered—always worrying about what people thought of me. I continued life as if nothing had changed. I went to parties, drank, smoked, and did some other drugs. I think in the back of my mind, I was hoping the pregnancy would terminate itself. I can’t recall the moment I told my boyfriend. But at the time, my parents noticed a change in me. They assumed I was on drugs. They wanted to drug test me, but I didn’t want to because I thought the test would show them I was pregnant. With that, we had a falling out and I chose to leave my house. I moved in with my boyfriend. The day came when I started showing, and I panicked. I always felt that my boyfriend’s parents were so judgmental about our relationship, and here I was in their house, pregnant. I had my boyfriend drive me to Planned Parenthood to find out my options. I was too far along for them to help me and asked about adoption. I kept calling around and found a place that would "help" me. It would take two days, if I recall correctly. They used laminaria to open my cervix. I was so relieved after the fact. I was able to continue to "live" life as I saw fit. But I always imagined, “What if?” What if I hadn’t been so selfish and kept the baby? My then-boyfriend died recently, and we didn’t end on good terms. Would he still be alive if we hadn’t done what we did? He went with me and was there for me through it all. I see my children now and think how precious their lives are. How could I have been capable of such a thing? I can never forgive myself for what I did. And to make it worse, the one person who knew what I went through is gone, and I have to carry this hurt all alone. What I did has been my biggest and most thought-consuming regret. I only pray God can forgive me for killing his precious gift.