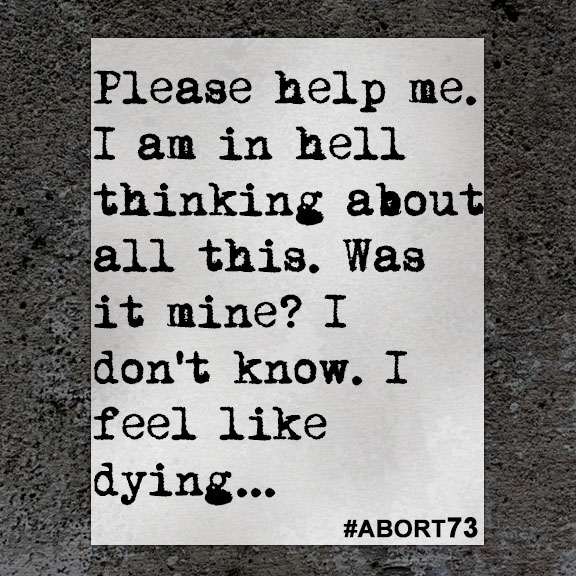 Please help me. I am in hell thinking about all this. Was it mine? I don’t know. I feel like dying...

I feel so sad for what my ex-girlfriend did. In January, 2016, we had a big fight and we stopped talking. After a few weeks she called me and we came back together. After one week she told me she needed to do a pregnancy test. I was a supervisor at a medical lab and she was a nurse, so we did a blood test and it came out positive. She was crying over the phone. I rushed to her at work to support her and to make her feel safe. I was happy, but she was not. She told me she would have to kill that baby. I begged her not to do it, but she insisted and kept fighting until I agreed to take her to the doctor. I took her straight from work and dropped her back at work afterwards. Her ex-boyfriend was waiting for her. I got so angry that I warned him to get lost. Later, another guy came to her work. She normally works alone in a collection point medical lab. She told me he was just a friend. I was so attached to that baby that I took her to work every day and bought her good things to eat. I cried many times in front of her to let the baby live. She said, “no,” without any feeling for the baby. On the day of the abortion, as I am myself in the medical field, I had to to do everything. I cried a lot, being a man. We stayed in a hotel because she could not go home. Nobody in her family knew. She was in the bathroom when I gave her the injection and pill to kill my baby. She was getting a lot of calls. She told me it was her mum, but later I answered and a man just asked, “Is it done?” I was damn angry. I asked her to please come out. She came out and told me it was nothing, but the guy told me the baby was his, not mine. My girlfriend kept saying something else. I continued to trust her and dropped her off at home. I came to know later that her ex-boyfriend went to see her at home. Later he called her again to ask where she was. I got angry and started questioning her. She ignored me and asked me to go. I don’t even know if the baby was mine. I came to find out she was having sex with three guys, including me. I feel sad for that baby. I did a big sin, but she continues to enjoy life like nothing happened. Is that normal for a girl? Please help me. I am in hell thinking about all this. Was it mine? I don’t know. I feel like dying.