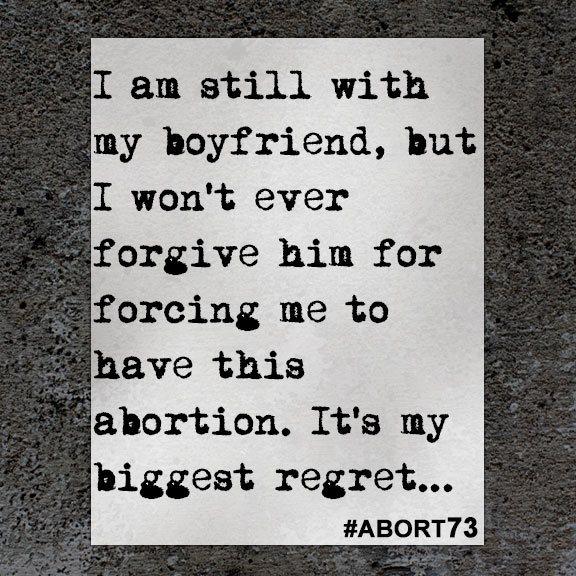 I am still with my boyfriend, but I won't ever forgive him for forcing me to have this abortion. It's my biggest regret...

I had been going out with my boyfriend for over a year when I found out I was pregnant. I did the test and it came back positive. Straight away I got so excited! My boyfriend was out working late, and I asked him to come home. I ended up telling him over the phone and straight away he told me to make an appointment at the doctor’s to get rid of the baby. He had a little boy himself from a previous relationship, and he always said he would not have another. But I thought if the day ever came he wouldn't say no to it. To say I was upset is an understatement. He didn't talk to me the rest of the night. and when he came home, he went straight upstairs to bed.

When I finally got round to getting the abortion, I had to go to the mainland because where I live, on an island, they do not believe in abortions one bit. I had to go on my own, and when my boyfriend dropped me off at the plane, I was I absolute bits. But I really wanted to keep him happy; I didn't want to lose him.

The next morning came for the abortion, and I think I was on a totally different planet because I don't really remember much. I just remember before being put under the anesthetic and wanting to change my mind at that last minute.

Before I knew it, I was back in the ward, and it was all done. I lay still for hours; I felt numb. The regret that flooded through me was horrible. The nurses discharged me, but I didn't even want to move. I stayed there for a few extra hours, thinking it through in my head. When I finally left, I felt empty. I met my boyfriend and told him I didn’t have any pain at all. Until a few hours later, I was in agony—like I was being punished for what had just happened.

I thought the emotional pain was bad then, but it got worse and worse. I've only just started not thinking about it every day. But now I am a month away from what would have been my due date, and I can't bear the thought of that day coming. I have a special place where I go to remember my baby girl (I have a feeling the baby would have been a girl). On her due date I will go there and have a little quiet moment to myself.

I am still with my boyfriend, but I won't ever forgive him for forcing me to have this abortion. It's my biggest regret, and I won't ever forget it. I find Mother’s Day hard; I want to have my baby with me. After all, I am a mother, but my baby is in heaven.

If there's anything I could do to stop abortions from happening, I’d be doing it in a heartbeat.