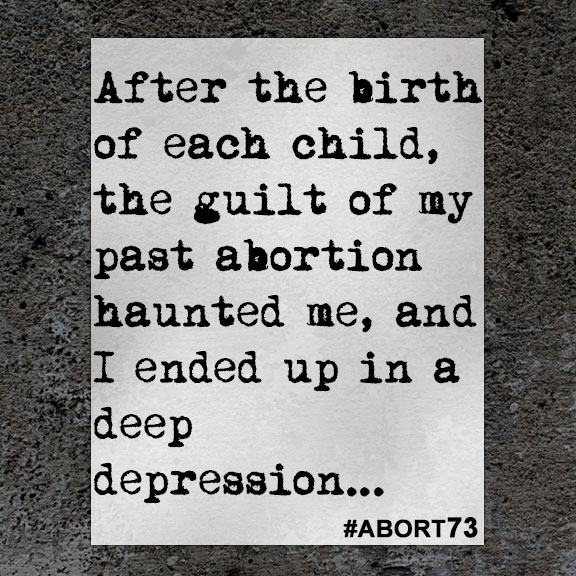 After the birth of each child, the guilt of my past abortion haunted me, and I ended up in a deep depression...

In 1992, when I was 19 years old, I became intimate with my boyfriend, and we quickly found out that I was pregnant. I immediately knew that I wanted to abort.  At first my boyfriend was not on the same page with me, nor was his mother. She gave us the option of raising the child herself, but I said, “No, if this child's going to be born, I will raise it. There's no way someone else is going to raise my child." We sadly chose abortion at 16 weeks gestation. I lost my child and two of my girlfriends that day. My friends were disgusted with me from that terrible choice. I thought I was being so responsible by allowing myself to continue in my college education towards a degree in early childcare; the irony. Not surprisingly, my relationship with my boyfriend soon disintegrated after the decision to abort. I graduated as planned and began my career after putting my abortion decision behind me. I later met a wonderful man in 1994 who later proposed and we wed in 1996, with plans to start a family. Having my business in our home allowed me to run my family daycare and raise our children. After the birth of each child, the guilt of my past abortion haunted me, and I ended up in a deep depression that meds couldn't break through. After an illness our firstborn developed at age two, I gave my life over to Jesus and my life quickly changed. Fast forward through 16 years of marriage. My husband left me because my faith interfered with our relationship. When I moved after the divorce, God placed me and our boys next to a Christian family! It turned out the neighbors wife whom befriended me volunteered at a pregnancy center. She asked me to get involved, but I hesitated because of my past abortion. She received my past sin with grace and set me up into a post abortion recovery class. Although I was not in the frame of mind after a divorce to dive into the mess my abortion caused, I was thankful she encouraged me to continue with the program. I got involved in the center after the class and training. Almost four years later, I continue to ask God how can I help others in this capacity. The pregnancy center is in a wealthy community where we are not busy with clientele, but I'm hoping God will move us to where He wants us to serve others.