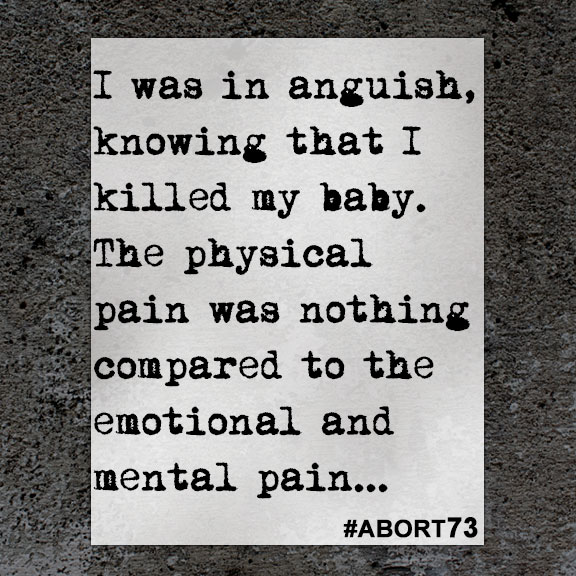 I was in anguish, knowing that I killed my baby. The physical pain was nothing compared to the emotional and mental pain...

I had just entered into university, but I had not yet reached eighteen at the time. I was excited about having entered into the school of my choice. I guess I was so excited to be out of my parents’ hold that I threw caution into the wind. I decided to have a friend with benefits. We got tangled up so deep that at some point, we started having raw sex—when we were high on drugs. And then the next morning I would always take pills. I don't really remember how it happened that I forgot to take the one pill that would keep my life afloat. The next few weeks I felt something changing in me. I grew rounder and more chubby; I could get tired so fast. I knew something was up, so I went to see a doctor. I WAS PREGNANT. Those were the words I never thought I would ever say when I was that young. I was scared and confused; I didn’t know who I could turn to. My whole world came crashing down on me so hard. I could barely breathe. When I told the guy responsible, he said I needed to get it out. I felt attached to my baby, so much. I could already imagine how it would have my eyes and nose and ears. She/he would have been beautiful, and I had to get rid of my baby. The thought weighed so heavily on me. I texted my mum and told her what was happening. She texted back the number of an abortionist. I was never so hurt as during that time. When I needed someone, I was all alone. I was depressed and drank a whole bottle of liquor to ease my pain, but all I felt was pain and darkness. The following day the guy responsible brought some pills that I had to take to abort my baby, but the drugs didn’t work as required. I bled just a little, but the cramps were intense. After I went home for Christmas, I decided to go back to the hospital to get checked because I was having some weird discharge. They told me that my baby had died in my womb, and if I didn’t get help soon I would get some complications. The doctor gave me pills to take and some to insert in my vagina. I went home right after that. The pain I experienced for the next week was unbearable. I would prefer getting kicked and shot in the head to that. I was in anguish, knowing that I killed my baby. The physical pain was nothing compared to the emotional and mental pain. It never got easier; it never will. I have problems getting involved with people. I have problems getting attached to anyone. Most of the nights, I am an insomniac, but I hope that I will one day get redemption and be happy again because right now it’s the same as not living. I am a zombie who forces herself to wake up most mornings. People say it gets better. When?