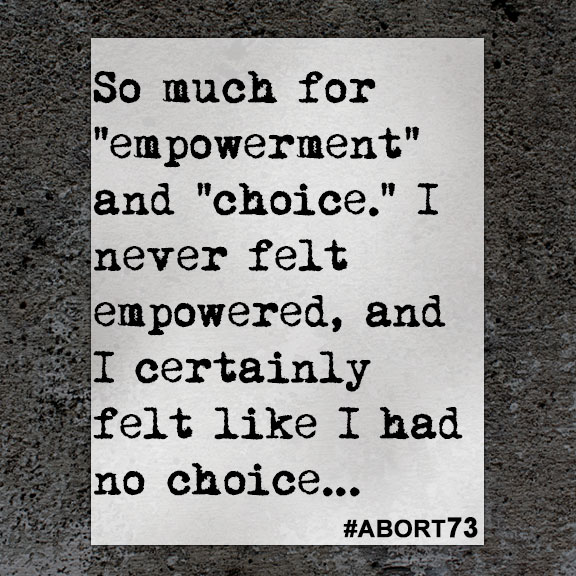 So much for "empowerment" and "choice.” I never felt empowered, and I certainly felt like I had no choice...

I was 20 years old in February 2008. I was a party girl, fresh out of rehab, when my life changed forever. It was a dreary winter afternoon; I was hanging out with my two best friends, Erica and Nick. I was in love with Nick, though he had zero romantic interest in me. We had been drinking all afternoon as we so frequently did, and he started flirting with me. We ended up having sex. He must want to be with me after all, I thought.

The next couple weeks went by uneventfully. I didn't see or hear from him. Then, around the first of March, I woke up after a night of drinking and taking pills, and it hit me. I knew I was pregnant. My period wasn't late just yet, but I knew. I told my friend Erica because I was at her house that morning. She was dismissive. "There's no way you're pregnant,” she insisted. "Didn't he pull out?”

Did he pull out? I struggled to remember. It didn't matter if he pulled out. I was pregnant. Those two pink lines appeared as soon as my pee hit the stick. There I sat, alone, in the filthy Walmart bathroom stall. Just me and my two pink lines. A rush of hidden joy swept over me. "I'm going to have a baby!" I thought. I kept my joy a secret from Erica and Nick. I had to pretend to be devastated, because what single 20-year-old girl would be happy about this? Plus, for Nick it was utter devastation. In his eyes, and Erica's too, there was only one thing to be done.

The day of my abortion was April 9th. It was unseasonably warm, and the sun shined bright. I was about seven weeks along. I couldn't believe I had let those I trusted the most talk me into this. "They must be right, this is for the best,” I thought as I made my way through the sea of protesters in front of the clinic. My friend Annie was with me; she was my rock. I chose her because she was a veteran of abortion, having had three herself. We went inside, checked in and found a seat in the packed waiting room. The nurse took blood, asked a few questions and had me sign paperwork. Finally, after five hours of waiting, the doctor called me back. The room was dark but clean. He was very nice, and sympathetic to my situation. He gave me the first of the pills I was to take, Mifeprex, aka ru-486.

After the clinic, we caught a bus to Annie's house in Saint Paul. The doctor had given me a prescription for Dilaudid, to manage the pain. I proceeded to get high on the Dilaudid and slept the day away. That night Erica brought me to her house, where I would complete the abortion the following day. The next morning, I took the first dose of Misoprostol, the pills that complete the abortion. I was blindsided by the pain and side effects. Nobody told me this would happen. And by that time, I had used up all the Dilaudid getting high the day before, so there was nothing I could do for the pain. I was lying in Erica's bathtub, writhing in pain and pleading with God to help me. I felt like I was going to die, and like I deserved it too. There was so much blood; it looked like a crime scene. Bodily fluids were coming out from everywhere. I was vomiting, I had diarrhea, and the bleeding wouldn't let up. I was screaming and crying, but no one was there to hear me. Erica and Nick were out drinking. I was all alone. After so many hours of misery, I finally drifted off to sleep. The worst of it was over.

The bleeding lasted for about three weeks. The physical pain was gone, but so began a new ugly chapter of emotional pain. I was in denial about my feelings. I truly believed I was going to move on like nothing happened. And for nearly seven years, I thought I had! I'm now 27, and I have been battling feelings of anger and resentment for years. I still struggle with addiction. Every time one of my friends has a baby, I'm overcome with anger and jealousy. Only very recently did I come to realize that my abortion is the cause of all my emotional issues. My state of mind continues to deteriorate. So much for "empowerment" and "choice.” I never felt empowered, and I certainly felt like I had no choice.