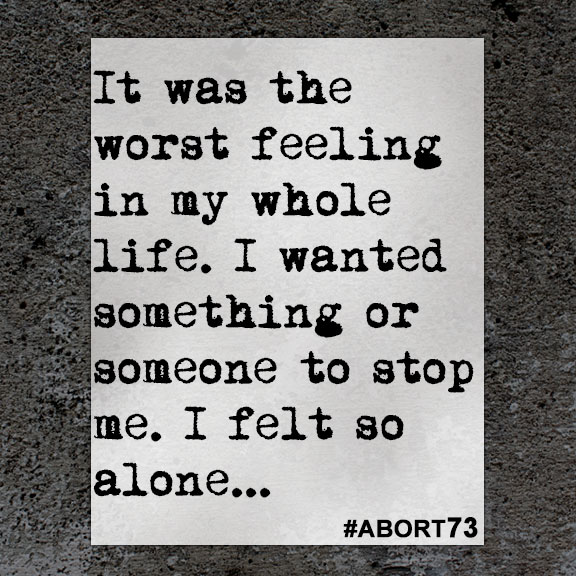 It was the worst feeling in my whole life. I wanted something or someone to stop me. I felt so alone...

My life was deeply affected by this trauma. I honestly never wanted to have an abortion. I wanted my baby badly. But I was so scared that no one would help me. Taking care of a baby on my own would have been a big change. Everyone told me abortion was the best option. Feeling alone was the worst feeling ever. Now I am left with this hurt for the rest of my life.I feel regret and sadness. I wish I could go back and take my baby back. When I see other babies or children, it reminds me of what I could have had. Finding out someone is pregnant hits me the most. I feel my baby would have been a girl. I gave her the name Kacey Hope. At the beginning of May, 2010, I noticed I was gaining weight. I never wanted to consider the possibility of being pregnant. On May 12, 2010, my life changed. I went to the birth control clinic at the London-Middlesex Health Unit. I went for STI testing. During the testing they did a pregnancy test. I was waiting in a room. The doctor walked in and paused. He said, "You are pregnant.” I started to cry and asked if there was any chance he was wrong. He said, "No, you are at least four weeks pregnant.” I cried even more and said, "I want an abortion right now.” They said I couldn't unless I went to Toronto. They gave me the phone number to call. That night I couldn't even sleep. I was so devastated that I had a little baby growing inside of me.

On May 13, 2010, I called the Woman’s Health Clinic at Victoria Hospital to book an abortion. They said I had to wait until I was eight weeks. They booked my ultrasound for June 4, 2010. During my wait, the morning sickness started. It was horrible; I was getting sick every day. I would go on the internet and look up week by week how big the baby got. I was very fascinated by it. There were times I really wanted to keep the baby. Fear took over though. The fear of giving birth, raising a baby, and adoption all scared me. I was so consumed by worry, and there was no one to help me raise this child. So I went forward with the easy way out, even though I really didn't want to.

On June 4, 2010, my friend picked me up from my place to take me to the ultrasound. I went in alone; I was in this alone. This lady put jelly on my belly and told me to just lay down. This was my very first and only ultrasound. I asked, "Do you see it?" She said, "Yes, do you want to see?" I agreed with some excitement. She turned the screen towards me, and I could make out everything. I saw the shape of the baby’s face and head. She pointed to a little circle moving and said, "Do you see that?" I said, "Yes.” She told me it was the beating heart. I asked her how far along I was. She told me I was eight weeks and four days. When I got home, I did a lot of thinking on ways I could possibly keep this baby. I came up with many, but fear would always make me think that abortion was probably the best thing. I even prayed to God and asked him to help me think of something before it was too late. I continued to look up on the computer how big the baby was. The morning sickness continued daily until the pregnancy was terminated. Every night, I would touch my belly, to see if I could feel anything moving. I started to feel love for this child.

June 18, 2010, would be the last day this baby had life in me. It was the worst feeling in my whole life. I wanted something or someone to stop me. I felt so alone. My friend and I went to Victoria Hospital at 7 am. The appointment was for 7:30. When I got there I was led into a room with a lot of people. They gave me a gown and slippers to put on. I was in bed for a half hour until they told me to take two white pills. Once you take these pills, you can't change your mind. Then they put an IV in my left hand. As I sat there with my friend, I noticed a lot of women, especially young women, walking in. They were all crying. I could tell why; they where in there for the same reason I was. I asked my friend, "How come I am not crying?" He told me it was because I was thinking more about myself instead of this little one inside of me. I didn't believe that though. I did care about this baby.

At 8:30 am, it was time for me to go to the operating room to have the abortion. They put some sleeping medicine in my IV, and I made the doctors laugh when I said I felt funny. They held a breathing mask to my face and within 10 seconds I fell asleep. I woke up in the recovery room. I was only asleep for a half hour. I was no longer pregnant. My little one is no longer growing inside of me. I let my baby go to heaven. I let my baby go at 11 weeks.

I will never forget the day I first saw my baby. My life changed as I watched the beating heart of my 8-week unborn baby on an ultrasound screen. I really do miss this now. I always play it in my mind again and again. Lying on the bed, watching my babies heart move. It was a living human being. I aborted my child 14 days later. On June 18, 2010, this baby’s little heart stopped. A part of me died that day, and life never got easier afterwards. The loss of a child to abortion is so tormenting. I feel like something is missing that should be here. I honestly never wanted to have an abortion. I desperately wanted this child. I wanted to raise this child. The thought of having to bring up a child on my own with no help scared me. So, I took the easy way out. Now, life for me is much different then before I got pregnant. I struggle with depression over my decision. When I see other babies and toddlers, it reminds me what I should have.I missed out on the opportunity to be a mother to my baby. Sometimes I get scared and think, “What if I never have another baby?” What If I never get that second chance to be a mother? What if this was the only baby I would ever have? I feel a deep loss for this baby that I never had. It has affected my life in many ways. I have lost friends, because of what I chose to do. I had people who I thought were friends go around and tell others what I did. A lot of people talked behind my back. I have been criticized and told I was a horrible person for killing my child. People tell me that I shouldn't feel regret. It was my decision, and I should just live with it. This is in no way an easy thing to live with. I experienced 12 weeks of a life growing inside of me. I felt the morning sickness the whole time. I had all the pregnancy symptoms. I know what it feels like to carry a child that I love inside of the womb. I sometimes think what the child would have looked like and been like. I make up fake memories as to what life would have been if my baby were here. I do know that God forgives me and that my baby is in heaven. I will meet her someday. I will always love my little one.