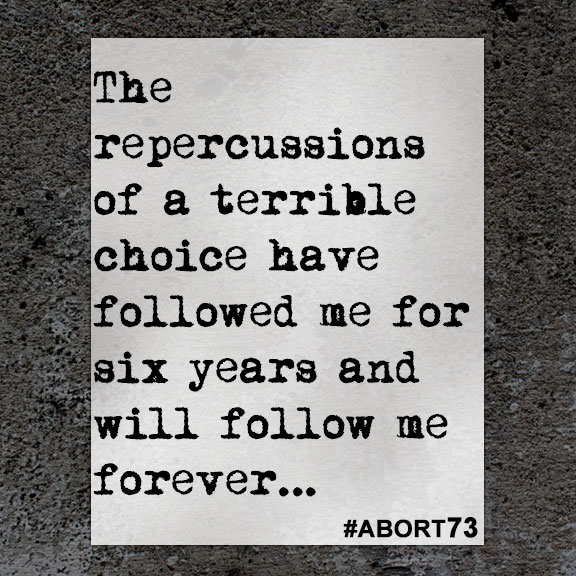 The repercussions of a terrible choice have followed me for six years and will follow me forever...

When I was younger I used drugs, had unprotected sex, and dated drug dealers. By the time I was 20, I had stopped using drugs but was still having unprotected sex with my ex-boyfriend. When I found out I was pregnant, he stopped talking to me. He told me that he would not even acknowledge the baby as his. I was working at a fast food place and had no idea how I would support another life. He was black and I was white. I was living with my racist grandparents at the time and was almost certain they would kick me out. I reached out to my mom, and she offered an abortion. I had started using drugs again and just wanted this to go away. I freaked out and agreed to the abortion.

When I visited the clinic I had SO many signs telling me not do this. I cried the entire time. I knew in my heart that this was wrong, but for my own selfish reasons I did it anyways. One of the staff members told me I did not have to go through with this, but I did it anyways. All because of fear. Fear of what my family would say, what people in town would say, and for financial reasons—which are NOT good reasons to end a child’s life.

I left that clinic feeling empty. I had INSTANT REGRET. I just wanted my child back. I fell into a depression. I prayed for God to forgive me. I begged Him to forgive me.

I have two children now. Their father does not pay child support, and he does not help out much, but we are making it. It IS possible to do things on your own. Anytime I see a mixed child I have regret and wonder what our life would have been like. I wonder what our child would look like. My children now have helped heal my heart, but even six years later, the void is still there. The regret is still there. The repercussions of a terrible choice have followed me for six years and will follow me forever.

If you are considering abortion, PLEASE reach out to a church, christian family or friends, or some type of resource in your area. If I had done that, I know I would have done things differently. My entire life would be different. My heart would be different.