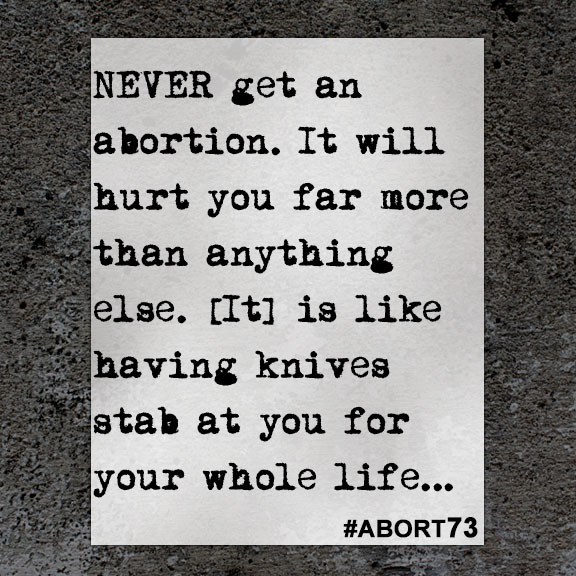 NEVER get an abortion. It will hurt you far more than anything else. [It] is like having knives stab at you for your whole life...

I am a college student; I don't have time; I can't afford it. These are the excuses people use when they get an abortion. DON'T LISTEN TO THEM! I was having sex with a guy at my college who was so amazing. He was the classic hunk. I was so happy that I was with him. I knew he didn't think about me the way I thought of him. I was one of many girls that he was with. I was with him for a month, and then I got pregnant. I waited to tell him because I wanted us to be in a committed relationship before he knew. I finally got him to be in a relationship with me. When I told him, he was conflicted. He loved being with me, but he wasn't interested in kids at all. He said that he would think about it for a while and then "get back to me." I still needed support, so I went to my parents. They hated me for getting pregnant. They said that I wasn't welcome in their home anymore. I needed a place to live, so I turned to my boyfriend and he was nice enough to let me move in with him.

I was living with my boyfriend when we decided to keep our child. I was so happy. I knew it was going to be hard, but I was going to make it through. After a week my pregnancy became a problem. My boyfriend said he was only staying with me for the sex and called me his “side b****." He finally said, "you need to get an abortion, or we’re done.” I knew that he was the only person between me and being homeless, so I got an abortion. It was HUGE MISTAKE! I can't believe that I made my worst nightmare a reality. I cry every day but don't let my boyfriend know. He insists that I take birth control now and has gotten nicer. However, I think I would be happier having a child and not a home, instead of the hell I live in now. I want my baby. I am thinking of taking myself off birth control and getting pregnant. I know that my new baby will never replace my other child, but I think giving another baby life will help some of the guilt that looms over me every day.  Never get an abortion if you are thinking of getting one. It is the worst thing ever. You go through far more pain then can ever come from having a child. If you don't want a child, try not to get pregnant.t If you do, NEVER get an abortion. It will hurt you far more than anything else. Getting an abortion is like having knives stab at you for your whole life.