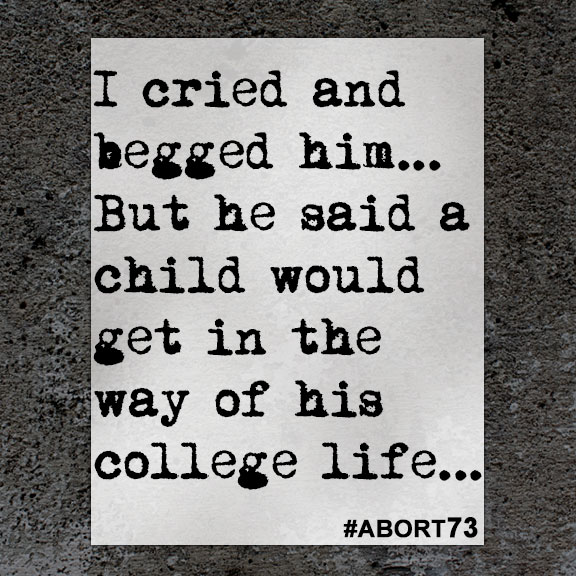 I cried and begged him... But he said a child would get in the way of his college life...

I had an abortion in October, 2015, at the age of 19. Being pro-life, I did not want to have the abortion, but I felt everyone was so against me keeping my child, including my boyfriend.

I had always had irregular periods. So for months I assumed my breasts, my cravings, gaining weight, and the small thumps in my abdomen had all been due to bloating and gas. I decided to make an appointment after feeling cramps. My gynecologist confirmed my pregnancy and said he saw situations like this a lot—women who are young and can’t take care of children. He said that abortion is the best option, gave me the number to an abortion clinic, and left the room.

The process took a period of 12 days, from finding out until termination. My boyfriend and I had not been using birth control for a year and a half, and we thought we couldn't have kids. He said if we can't get pregnant in the future, we will adopt, but he hopes we do have a baby. He said he will love both me and our child.

When I told my boyfriend over the phone from the gynecologist’s office that I was 16 to 18 weeks pregnant, he cried. His reaction was not a pleasant one. He told me he was happy he could be a father, especially because his father walked out on him, but that he was not ready to have a child and that I should get an abortion. I wanted to make him happy, but I also wanted to keep our love child; I had hoped he would change his mind. My parents have always been abusive, though, and he used that in his argument against me keeping our child. My parents paid for my oldest sibling’s college fees, while I struggle to keep three jobs to pay off my debt for each semester.

My mother works in labor and delivery and upon seeing my baby bump, she pulled my hair, pushed and hit me, and called me some awful names. She said if I were to be pregnant, she would kick me out immediately, and I told my boyfriend this. Again, he told me he wasn't ready to be a father and that the child and I would be homeless and have to live on the street. I cried and begged him. It was going to be hard, but if he moved out with me, we could raise our baby together. But he said a child would get in the way of his college life, and I was being selfish because not only couldn't I afford college, I couldn't take care of a child, being so young and alone. He said if the baby was over 20 weeks, we would keep the child. He arrived at my house with the directions to the abortion clinic. Within three days, my surgical abortion took place and it was over.

The clinic told me I was 23 weeks and 5 days—that I had to do the abortion today or they couldn't do it. They added that the procedure would only cost me $60, I would bleed and cramp, but the medication would make me better. I had no time to really consider my options. I told my boyfriend I was at 23 weeks, way over the 20-week limit he proposed. But he said we were already at the clinic and to get it over with. So i waited for them to call my name, sniveling into the room and waiting to black out from anesthetics. When I awoke in tears, I asked the nurse if my baby was okay. She scoffed and said, “He’s fine,” gave me some water, and left me on the gurney.

After a few weeks, letters show up to my house saying that I owe the clinic over $8,000 for the anesthetic and procedure. My folks saw it; my father grabbed his belt to hit me, and my mother called me a murderer and said that I was going to burn in Hell for my sin.

A few weeks later, my sister announced that she’s pregnant. And my folks are so ecstatic. Her baby is due in August; mine was due in March. And all they speak of is how they can’t wait for their grandchild, how pretty she is, and how big she is getting.

I lost feelings for my boyfriend, but now he begs me and cries to let him make it up to me. He says we can have a baby in 2017, and everything will be good; he will be a father. While having a baby would make me happy, I no longer feel like I deserve it. In fact, I feel I deserve death.

Nowadays, its hard to get out of bed or smile or eat, because when I see babies, pregnant women, fathers with children, baby toys, food, strollers anything and everything reminds me of my mini pumpkin.

When I asked my folks why they were so kind to my sibling, they said she is four years older than I am, more mature, and has finished college. She is allowed to stay in the house pregnant and enjoy her pregnancy, while I have to watch.

I can’t afford a therapist, nor have I found anyone to talk to about this in person. I suppose I am reaching out for help much much too late. But I don’t feel like I can exist without my baby anymore.

I wish I could say there is a happy ending to this. But for now I am living in the dark side of regret.