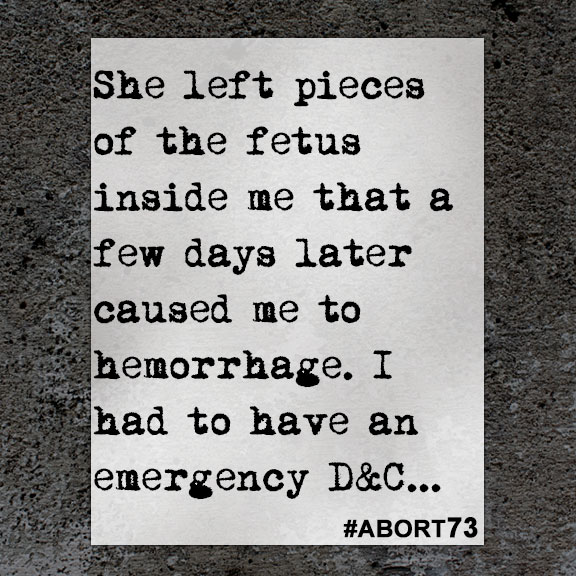 She left pieces of the fetus inside me that a few days later caused me to hemorrhage. I had to have an emergency DNC...

When I was 19 years old, I had an abortion. I already had a beautiful baby girl who was one year old. I got pregnant both times while on birth control. The first time I was using the pill; the second time I had received a birth control shot. My baby's father was very abusive and said if I kept the second baby he would leave. My father had just passed away, and my mom was still trying to grieve and take care of my little sister. I went to social services for help, and a social worker told me that I was already a burden on the state because I was receiving food stamps. I had graduated high school, was in college and working, but still needed some assistance. She told me that medical assistance would pay for an abortion. Feeling lost, afraid, and alone, I went and had it done. I screamed through the entire procedure, begging God to forgive me. They had to tranquilize me to calm me down. The doctor wasn't sympathetic and was trying to hurry me out because I was scaring the other women who were waiting to have their abortion. As a result, she left pieces of the fetus inside me that a few days later caused me to hemorrhage. I had to have an emergency D&C. I never have fully recovered from the experience. I went into a deep depression afterwards and constantly prayed for God to give me my baby back. A few months later, still receiving the depo shot, I found out I was pregnant again with another baby boy. My prayers were answered. The abusive boyfriend tried to kill me and the baby by running me over with a car. I left him after that. Today I have two beautiful children. I know God forgave me, but it took many years of therapy to forgive myself. I now have two grown healthy, successful children and pray they never have to endure pain like I have. I also pray my story will help women who feel scared and alone to make a wise decision. All babies are blessings and deserving of life. May God bless all who reads this. Through Christ I pray Amen.