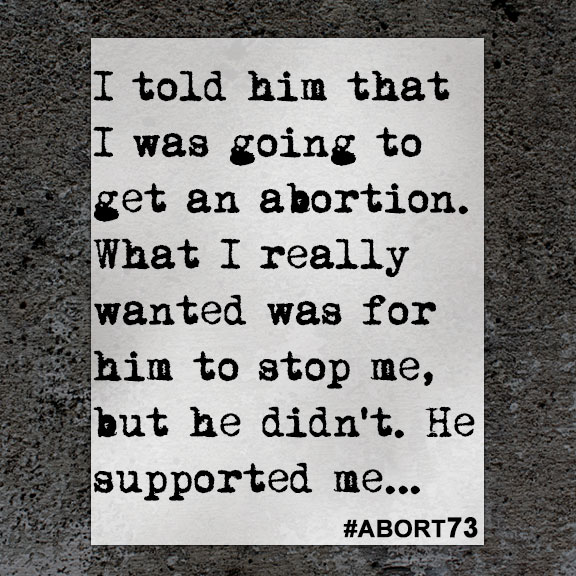 I told him that I was going to get an abortion. What I really wanted was for him to stop me, but he didn’t. He supported me...

I wasn't with my ex anymore, but we were still messing around. I still loved him, but he didn't feel the same for me. I thought the only way I could show him I still loved him was by letting him having sex with me. My best friend told me that was the dumbest thing I could do. It was. That's all he wanted. When he left, I told him I would get a Plan B, but I couldn't go that day because I was baby sitting my brother. So I tried going the next day, and all the clinics were closed. I was scared. So I just pushed it to the side, and I forgot about it. I thought I wasn't going to get pregnant and I couldn't get pregnant.

The next day I started feeling so sick every time I woke up. I didn't see it as anything big; I just thought I was getting sick. I was also getting this feeling every time I laid down. It would feel like acid coming up my throat. Also my boobs got so tender. I just kept ignoring all these things that were happening to me. I thought that it was just my period. I knew something was up with me when I almost passed out in class. I started Googling all these things that I was feeling, and it all led up to me being pregnant. I kept reading until I saw you could make a home made pregnancy test so I did. I did it once; it came out positive. I did it once more; it came out positive. I cried. I cried because I had no idea what I was going to do. The father of my kid didn't even talk to me.

I kept it to myself for as long as I could. My belly was growing so fast I couldn’t hide it, so I told my best friend. She couldn't believe it. We went down to the clinic that was next to my school and the test came back positive. The doctor asked me what I was going to do, and I told her I couldn't have my baby because my parents would hate me and never forgive me. I told my ex about my baby, and he was upset. He made me feel so stupid, like it was all my fault. All I asked from him was for some moral support. I told him that I was going to get an abortion. What I really wanted was for him to stop me, but he didn’t. He supported me.

I called and made the appointment myself, and I was so scared. I wanted to be put to sleep, but they couldn't because I was too short. I asked if I could have someone in the room with me, and they told me I couldn't. He was there for me all the way through the abortion. I was happy I had him there; I didn't feel as alone. When they called me in, the nurse asked me if I wanted to see an ultrasound. I said “yes,” and when I got the ultrasound the doctor didn't show me anything but just told me I was five weeks and three days along. I remember lying on that table. It hurt so bad; I was crying. I wasn't crying because it hurt, I was crying because I wasn't going to have my baby. I remember walking out and just opening the door and seeing him there. He held me so tight, and I swear I could have just stayed there in his arms.

We went to my house after the appointment. I lie on one couch, and he sat on the other. I remember how bad the cramps were. He sat above my head and massaged my hair and told me that everything was going to be okay. We moved to one couch and I laid my head on his lap, and I told him "the first things I thought about was whether he/she would look like you.” He just broke down crying. The next day I asked him to leave class because I was crying, but he said he couldn't. Since then, he hasn't spoken to me. I had a feeling that's all he wanted—for me not to have my baby. I miss my baby so much. I regret it every single second of every single day. I wanted to know the sex of my baby so bad I used a Chinese calendar to figure it out. It would have been a baby boy. I miss my little peanut. I would have been about 23 weeks. I want that baby more then anything.