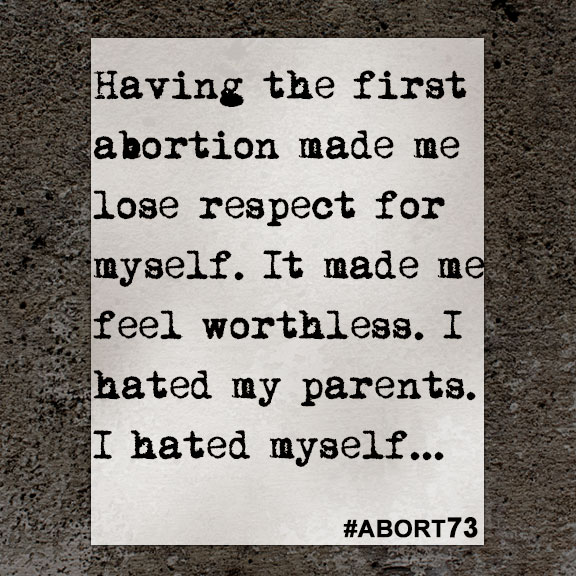 Having the first abortion made me lose respect for myself. It made me feel worthless. I hated my parents. I hated myself...

When I was about 10, a family member forced me to do inappropriate things to her. It destroyed me mentally. All I knew I was good for was sexual things. I had good grades and had been an innocent young girl until that family member changed me. When I was 14, I met someone and soon thought It was love. I was quick to have sex with him because I thought that was the only thing I was good for. He was physically abusive, a lot stronger than me, and enjoyed sex. I ended up becoming pregnant. He didn't want the baby, and my parents didn't want me to have the baby. So I was forced to have an abortion. That day I lost myself completely. I didn't know who I was at all and regretted it completely. A few months later I became pregnant again. Having the first abortion made me lose respect for myself. It made me feel worthless. I hated my parents. I hated myself. I thought I was nothing but what was between my legs. After Finding out I was pregnant again, I thought about it and was ready to have the baby. I wanted to give the baby life, but my parents insisted I have another abortion. I was a month away from turning 15. That second abortion killed me. I hated the world and hated myself. I thought about killing myself several times. The babies' father told people at school what I had done, and I was bullied about it up until I graduated. And I still hear about it all the time. I am now 18, a month away from turning 19 and blessed with a beautiful baby girl from a different guy. I think about my unborn babies all the time. I regret it so much. I still think about killing myself. I believe my life is not worth living. My daughter's father broke things off with me after he found out what I had done when I was 14. Now I am going to court because he wants custody of her. If I lose her, I don't know what I will do. ABORTION IS NOT THE ANSWER! IF YOU ARE THINKING ABOUT IT, DON'T. IT DESTROYS YOU AND WILL HAUNT YOU FOR THE REST OF YOUR LIFE. I'M STILL MENTALLY DAMAGED AND HAVE NO FRIENDS TO TALK TO SINCE EVERYONE IN TOWN KNOWS WHAT I HAVE DONE.