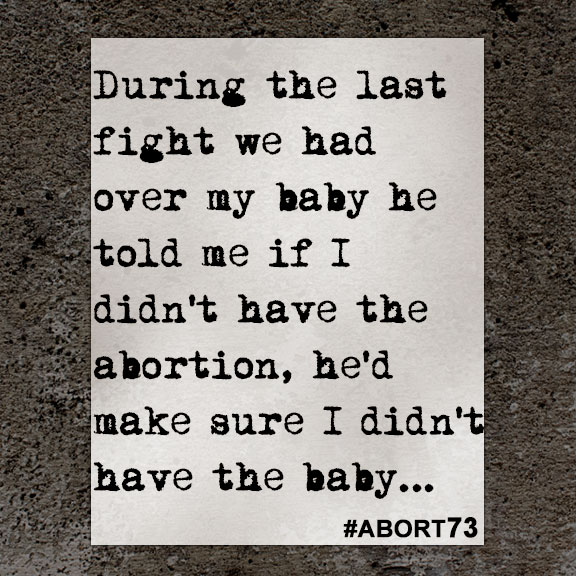 I had been with him since I was 15 years old. Three months after I turned 17, I found out I was 4-weeks pregnant. I assumed I was beforehand but ignored the thought until I wound up in the hospital because of stomach pains. After two days of being in and out of the hospital, they told me I was pregnant. Words couldn't describe how happy I was. All that shattered the minute the doctor left the hospital room. The first words out of my boyfriend’s mouth were, “You HAVE to have an abortion.” Immediately my mood was ruined. I couldn’t believe the words coming out of his mouth. I wrapped my arms around my stomach as if to protect my baby. I refused. He was 22 years old; I was only 17. How could I be ready to prepare for this baby and he immediately hate it? My heart broke. During the last fight we had over my baby he told me if I didn’t have the abortion, he'd make sure I didn’t have the baby. That’s where I gave in. I couldn’t bring a child into this life with a father who hated her before she was even born. I just couldn’t imagine doing it, so instead I wrecked my own life and broke my own heart by giving him what he wanted. He called the clinic and told them that we wanted to have an abortion. They set the date for October 3rd, 2011—the day my world flipped upside down and was completely shattered. I waited in the waiting room for hours, and the minute I lay on the table I had the worst urge to run, to get up and leave and run as far away as I could to protect myself and my baby from what was about to happen. But I didn’t. I lay there for however long the procedure was and when it was done the only thing I could think was that I didn’t get to tell her I love her, or explain why, or tell her “I’m sorry.“ I wrecked two lives by doing this. I essentially murdered two people. Things were never the same after that. Within months we broke up. I hated him after that. I couldn’t forgive him for forcing that decision on me. After that I contemplated suicide for a year or more so I could be with my baby and protect her the way I should have all along. The amount of self hate I have inside of me because of one day of my life is completely unhealthy, but I refuse to see anyone. I deserve to suffer the same way my baby did on that day. I’m 21 years old, and happy is something I'll never be because I’ll never have my baby with me.