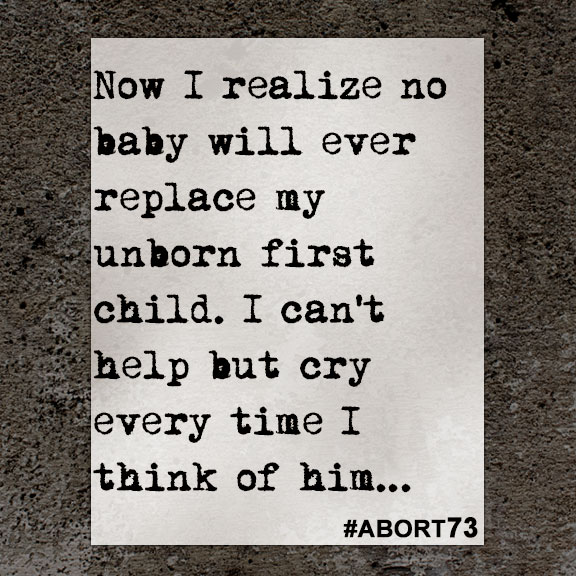 Now I realize no baby will ever replace my unborn first child. I can't help but cry every time I think of him...

It's been six years since I lost my would-be first born. I had just starting dating my would-be husband then, and we were in a bad spot in the relationship. We also feared judgment from family about having a baby out of wedlock. I was about six weeks along when we went through with the abortion. Afterwards, I tried to push the pain and grief aside so I could cope. Now we are pregnant and all the guilt, sadness, and loss of my first baby came back like a tidal wave.

Throughout these past six years I've often thought about my baby. We believed he was a boy and named him Titus. I thought about him often, with his black wavy hair—dressed just like his dad. When we were at the beach, I imagined my baby boy in his swim trunks. When we saw fireworks, I imagined seeing his eyes light up. At Christmas, we'd take him to see Santa and then go ice skating.

I had created an alternate universe where my baby was still here, still alive, warm, growing bigger and stronger. I wanted another little boy for redemption, for a second chance to make things right. As luck would have it, we are expecting a daughter, and I was saddened that I could not have my Titus back.

Now I realize no baby will ever replace my unborn first child. I can't help but cry every time I think of him. I love him so very much I hope he forgives me.