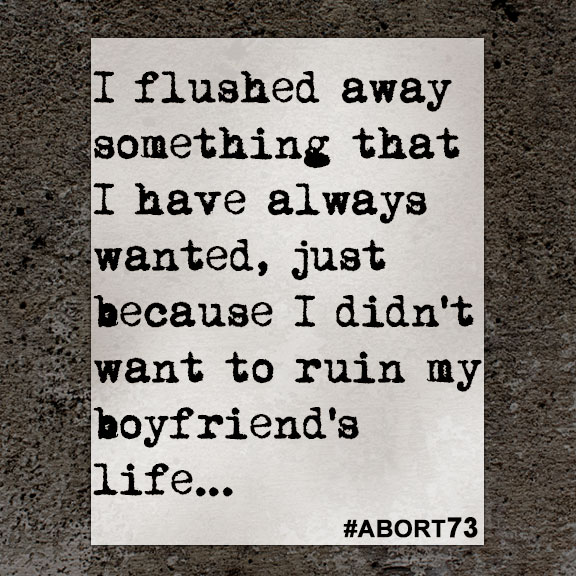 I flushed away something that I have always wanted, just because I didn't want to ruin my boyfriend's life...

I don't know if writing "my story" will make me feel better about the choices I've made in my life, but if it can help someone else, and prevent them from missing out on what I know could have been a beautiful thing, then I would like to share, because there are very few people in my immediate life that I feel I can even talk to about this chapter of my life.

A year ago (2014), right before Thanksgiving, I conceived. I wasn't 100% certain at the time, but I had a feeling—just because I felt different. I found out I was pregnant three weeks later, and when I looked at the little positive sign on the pregnancy stick, I was both overjoyed and terrified.

I was overjoyed because I have wanted kids since I was about 20 years old, once I was mature enough to understand the joys and hardships motherhood entailed.

I was terrified because i hadn't even been with my current boyfriend a full year yet, I still lived at home in the basement, I made [little] money, and I had no plans for moving or getting my life together. Not only that, but I had made the biggest mistake of my life by promising my boyfriend that, should I ever get pregnant, I would abort for him—and I have a habit of keeping my promises.

When I presented the news to him, it was over the phone. I was alone in my basement, crying, clutching my belly, trying to comprehend exactly what was happening. My boyfriend made it very clear that he did not want the baby. He wasn't ready. We didn't have the money. Then there was the whole thing with my dad always telling me, "don't you get pregnant in my basement.”

My boyfriend and I went to a Planned Parenthood clinic together. All the while I tried to talk him into changing his mind. He never did, and I kept my promise because I didn't want to somehow ruin his life. It sounds so stupid now, but at the time I really thought that I was doing a good thing for our relationship. I thought it was proving to him that I'd do anything for us, because I loved him and because I wanted to show him that I won't break my word when I give it. So, I took a set of pills. One was given me by a doctor that did not care who I was and then another that I would later take myself, in the "comfort" of my own basement, with my boyfriend there with me.

The pain that came from the pill does not amount to the pain I felt in my heart later. I flushed away something that I have always wanted, just because I didn't want to ruin my boyfriend's life.

I'm still with this man. I do still love him, but I resent him. I'm not sure if he knows this or not, because we don't talk about it anymore. But I think about it almost every day, and I regret it more and more as time goes on. The [worst] thing is that, while I promise this man the world, he cannot promise me a damn thing. The "major" promises he has made—like moving out with me and starting a family—he has backed out on. I'm beginning to think that nothing will change, and I've kept a promise to someone who will never value me as anything other than an object that he wants to be around whenever he's feeling bored.

If you are a woman in a tough situation like I was, don't give up on your child. Not for anyone; Not your father, your mother, your boyfriend. Do what YOU feel in your heart is right. If you made a promise to someone like I did, let it go, and forgive yourself, because the reward at the end will be worth it.