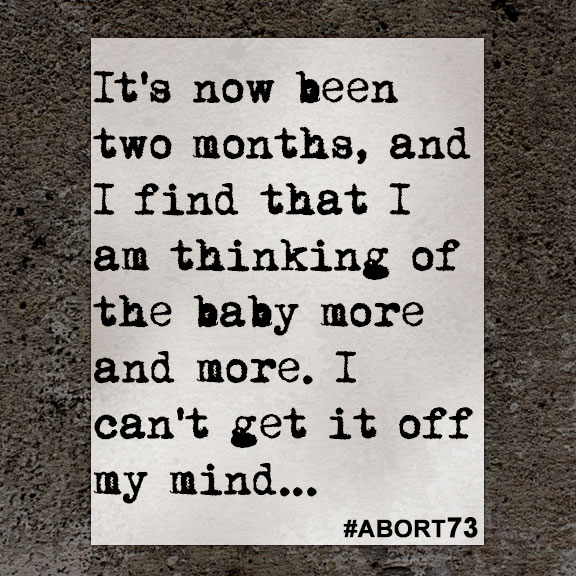 It's now been two months, and I find that I am thinking of the baby more and more. I can't get it off my mind...

I knew I was pregnant before I even missed my period. I did a test and got a faint positive. My boyfriend was so excited, and with his excitement I got excited. But things weren't that simple. We had only been together for a few months, and I had only separated from my husband earlier in the year. And things weren't easy between my ex, and I knew things were going to get difficult. My ex and I have three children already, and I knew they weren't ready for my new boyfriend to be in their life full time.

I started playing with the idea of termination in my head. I felt like I was on this ticking time bomb because I had this baby growing inside me, but I couldn't make a decision. I had some counseling. They gave me some strategies to help, but that weekend my ex guessed that I was pregnant and it all hit the fan. He did threaten to try to get all our kids to live with him. I knew he would make every single step so hard for me to move on. The thought of losing my current children to their Dad full time was heartbreaking and scary. I also had a lot of very big bills coming up and didn't know how I'd even be able to start buying baby things. I eventually took my children away on a holiday, where we had no interruptions from my boyfriend or their father. I realized that I needed to have the abortion.

After it was booked I felt calmer and organized.  The morning of the abortion, I woke up slightly teary but got over it quickly. My boyfriend came with me but was still 100% trying to talk me out of it, so I had to try and block him out of my thoughts. I had good friends texting me, wishing me well and telling me they were thinking of me. As silly as it sounds, I actually used this to help me get through the door. I envisaged them holding me up.

We met the nurse together, but when I saw the doctor I was alone. When the nurse came to take me to gown up, I stupidly asked to see the ultrasound picture. She showed it to me very briefly, but the image is stuck in my head. I was almost 10 weeks. I remember laying on the bed with my feet in stirrups and being absolutely petrified, but then I fell asleep.

When I woke I felt strangely calm. I didn't cry, and I felt like it was the right thing. That afternoon I saw my newborn baby nephew. When I held him I instantly burst into tears. My ex husband was then nice as pie and sweet as he could be to me.  It wasn't until about three weeks later that it started to really hit me. I can remember saying I never expected to feel so ANGRY and so GUILTY.

It's now been two months, and I find that I am thinking of the baby more and more. I can't get it off my mind. I have never regretted something so much in my life, and I wish that I had just had my baby, even if I had it alone. A good friend recently had a miscarriage and when she told me crying, I felt like I had been punched in the stomach. She knew what I had done, but I wouldn't dare tell her that I regretted it because I chose to do that; she didn't choose hers, so my guilt became worse.

What's harder now is I don't know if I want a baby in the future. I feel like I do need another baby to help me heal, but then I also feel like I actually just want THAT baby. I'm worried that I will continue to feel more guilty if I do have a baby—like I will always miss the baby that could have been. What I really struggle with is wondering if the baby had a soul.